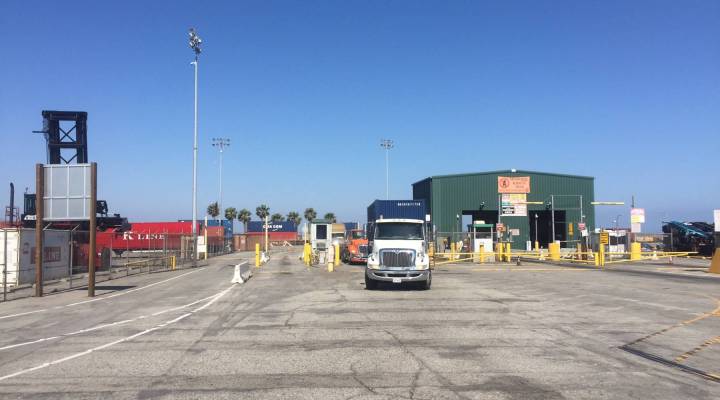 COPY
A truck pulls out of the port of Los Angeles carrying a container.  Andy Uhler/Marketplace

A truck pulls out of the port of Los Angeles carrying a container.  Andy Uhler/Marketplace
Listen Now

Some drivers are currently striking at a pair of the nation’s busiest ports — Long Beach and Los Angeles — as a way to demand reclassification. Every day, as many as 25,000 short-haul trucks trek to and from the ports, transporting containers filled with goods that end up in stores like Wal-Mart, Target and Costco.

Most of the drivers aren’t employees of a transport company. Instead, they lease or own their trucks and are classified as independent contractors. Many don’t think that’s the way it should be. The California Labor Commission has seen more than 800 complaints filed against port-trucking companies in the last five years.

Jorge Mayorga has driven a truck in Southern California for more than 30 years. He called the situation an “illusion of independence” because he can make his own hours and decide when he picks up a load or not.

“But we never have the possibility to make a contract with the customer directly,” he said. “The company does.”

“There’s really no functional difference regardless of the label of how that driver does their work,” he said.

But it’s cheaper for a company. It’s not on the hook for paying benefits or providing insurance. About 750 trucking companies work out of the ports of Los Angeles and Long Beach, most with fewer than 100 trucks.

Rich Pianca, acting general counsel for American Trucking Associations, said the majority of litigation, especially in California, is ruling on the side of drivers, which could be a problem for the industry.

“The downside of all this is, it’s sort of throwing the baby out with the bathwater,” he said. “And if you go and talk to drivers who have chosen the owner-operator model, they will tell you, overwhelmingly, that they want to be an owner-operator because they want to run their own small business.”

He said if drivers wanted to get jobs as employees with benefits, they could.

James Johnson used to be an employee driver. Now, he leases a truck from Fox Transportation. He said he makes more money driving for himself, but he also has to hustle.

“It’s a business,” he said. “Like me — if I drive this truck, I don’t have any other drivers, so I’m responsible for me. If I don’t take care of my business, it’s not anybody else’s fault.”

Jonathan Rosenthal, chairman of Total Transportation Services, based in Los Angeles, abandoned the independent contractor model a few years ago because he said he could see what was coming. The California Labor Commissioner has awarded more than $35 million to drivers since 2011. He said he’s willing to pay more for drivers right now to avoid the risk of lawsuits.

“What people are not contemplating when they think about an independent contractor model is not just how much am I paying my driver and how much it costs me to operate the business, but how am I amortizing the cost of that litigation?” he said. “Because that litigation is going to ensue, one way or another.”

For Rosenthal, giving up the owner-operator model was a business decision. But he admits he likes having more control over how his drivers are treated.