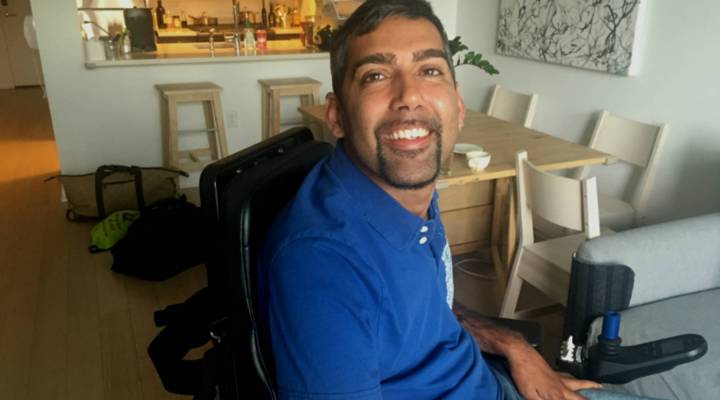 Jason DaSilva said after he developed multiple sclerosis about 10 years ago, getting out got more complicated.

“There were times that I was finding it impossible just to go out and meet a friend at a bar, or have a date,” he said, speaking in his apartment in Queens, New York. It was hard to figure out where his wheelchair would fit, how many stairs there were, whether there was a bathroom he could use. Sometimes even a phone call ahead couldn’t clarify all his questions.

So, DaSilva made an app, AXS Map, which uses Google Places to let people around the world post detailed reviews about accessibility. He imagined it working like Yelp, but for people with various types of physical disabilities.

Yelp has a single yes/no question about whether venues are accessible to people in wheelchairs.

“That’s not enough data. We want more specifics,” he said. There are different kinds of wheelchairs, of course, and people who may be able to make it up or down a couple stairs where others can’t. Noise level and how crowded or well-lit a place is may also be factors in accessibility.

The app is free, but DaSilva has a related startup that’s looking for investors. Other people have made apps in German and Japanese, and there are apps that focus on Canada, Ireland and Brazil. Another deals exclusively with rating hotels for accessibility. DaSilva said he still hopes to become the biggest.

These apps could, in theory, help 15 percent of the world’s population — that’s the number of people the World Health Organization estimates have some sort of disability. Businesses and public facilities often aren’t accessible for those billion-plus people, and regulations and enforcement vary by country.

Updating public and private spaces to be accessible will be a part of the discussion at a United Nations meeting of states’ parties to the Convention on the Rights of Persons with Disabilities this month in New York. (The convention, by the way, is a treaty the U.S. has yet to ratify.) Derrick Cogburn, associate professor of International Relations at the School of International Service at American University, is presenting on the role of technology in that effort. He thinks big data and crowdsourcing are the future of accessibility.

“The disability community can really vote with their pocketbooks, so to speak,” he said. “It will have an impact on businesses in the same way that Yelp and Travelocity have had on companies.”

Other apps for people with disabilities might focus on direct assistance. Professor Erin Brady from Indiana University helped develop a tool that lets people who are visually impaired get a description of their surroundings.

“Many of these tools actually rely on the fact that humans are actually able to do some tasks better than automation or technology can currently. We’re using humans because they’re better at answering these kind of complex or subjective questions.”

I wanted to see AXS Map in action, so I opened it up on a busy block in Brooklyn. After a little bit of filtering and scrolling, I found a restaurant called Yayo’s just down the block. Up a short ramp into a big open space, I met manager Geronimo Diaz.

“We try to accommodate every wheelchair that comes here no matter how busy we are,” he said. “That is a priority for us.”

In theory, every U.S. business is supposed to be accessible, but older businesses often haven’t made those updates; if they were built before the passage of the Americans with Disabilities Act in 1990, small businesses may be able to avoid the regulations until they renovate or expand.

Diaz said Yayo’s first became accessible when it was renovated, and the changes were required. Now, people in wheelchairs are some of the restaurant’s most loyal customers.

“They keep on coming back,” he said.

But a lot of businesses still aren’t thinking about disabled customers. Crowdsourcing is a workaround, and eventually, it might be a way to pressure them to change.

DaSilva, for his part, is working on a virtual reality project that would let people with disabilities actually preview a location in 3-D before going there — it’s the next step, he said, in using technology to gather accessibility info.

“Imagine being a person in a wheelchair, or with a developmental disability,” he said. “You can see Grand Central Station before you get there.”