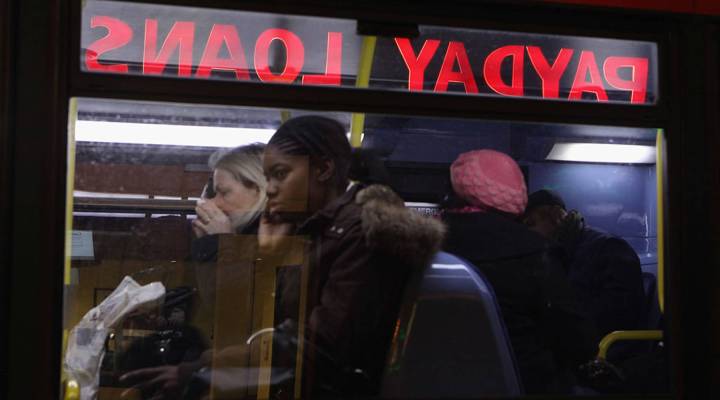 The Consumer Financial Protection Bureau (CFPB) is out today with a plan to change up the payday loan industry.

The roughly 1,300 pages of proposed rules would require lenders to do some extra research to make sure consumers can actually pay back these loans without having to take out new ones.

That cycle of debt is something consumer advocates and the Obama administration say is basically the industry exploiting low-income people.

Marisabel Torres of the National Council of La Raza is mostly happy with the proposed rules.

“It’s a positive step that will help to eliminate bad actors and predatory products from the lending marketplace,” she said. “So we’re pretty excited about this rule. It’s been a long time coming.”

But she said this draft of the rule has some loopholes that cause concern, like exempting some loans from requirements to make sure borrowers can actually pay the money back.

“Without exceptions,” said Torres, “you should be able to repay a loan if you take it out and still meet all your basic other financial obligations, pay for your basic living expenses.”

The Pew Charitable Trusts, which has done a lot of research on “small-dollar loans,” said the rules don’t go nearly far enough to protect consumers.

“The CFPB ended up focusing mostly on process, underwriting, how a lender should document a loan,” said Alex Horowitz, a researcher with the group, “but what borrowers care about is dollars, and small installment payments.”

But that paperwork might be enough to put some lenders out of business, according to Dave Pommerehn of the Consumer Bankers Association, which represents banks.

“This is resource prohibitive for most providers of this type of lending, whether they be a bank or a non-bank,” he said of the added requirements in the proposed regulations. “And quite honestly, the cost [of compliance] would add greatly to the cost of the loans themselves, making them rather cost-prohibitive to offer.”

Which also means that if some lenders go out of business, bigger banks won’t have incentive to step in and replace them.