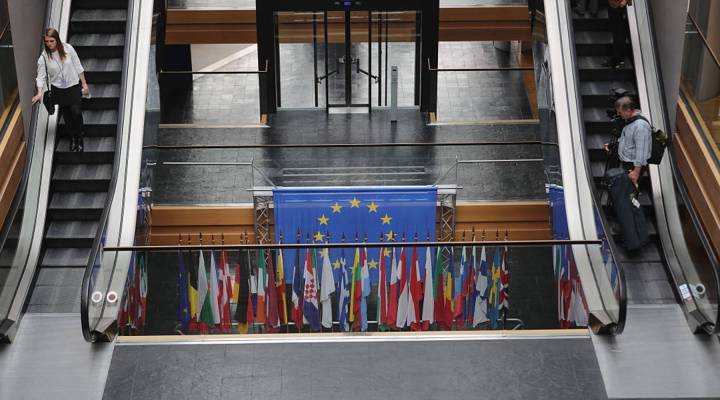 COPY
People walk past flags of the EU inside the European Parliament on May 11, 2016 in Strasbourg, France. Christopher Furlong/Getty Images
Brexit

People walk past flags of the EU inside the European Parliament on May 11, 2016 in Strasbourg, France. Christopher Furlong/Getty Images
Listen Now

President Obama, in a recent stop-off in Britain, urged Britons to vote to stay in the European Union in their national referendum on June 23.  Some felt it was inappropriate for a U.S. president to speak out on a fraught domestic issue. But what of the tens of thousands of American expatriates (200,000 at the last count) who live and work in the U.K.? They may not have a vote in the referendum but the result certainly IS their business; it could have a lasting impact on their lives and livelihoods.

“This country is my adoptive home and — for me  I feel passionately that Britain should leave the EU,” said American-born, London-based investment banker Hunter DuBose. “Right now we are strangled by EU regulations, laws and policies. My business would do much better if Britain were out.” DuBose feels so strongly about the issue he co-produced a feature length documentary urging the Brits to exit — or “Brexit” — the union.

Other American expats living in the U.K. strongly support the country’s EU membership.

“It makes perfect sense to me as an American,” said Shara Terjung, an accountant from Baltimore. “In fact I would like to see the EU turn itself into a federation with Britain as a part of it. The United States shows that federalism works: you’re stronger when you work together.”

Terjung is living and working in London because her husband is European and has the right to settle in any of the 28 member states. But now, she believes, the British referendum campaign is souring the atmosphere in the U.K.

“You see more and more headlines about immigrants buying all the houses, they’re taking all the jobs, they’re stealing all the benefits.  It’s not very welcoming and it doesn’t really make us want to stay in the long term,” Terjung said.

Christian del Valle is also feeling unwelcome. He arrived in the U.K.  17 years ago from Texas and now runs an ecological investment fund and advisory business. If there’s a vote for Brexit, he would consider shifting his business to continental Europe.

“A large number of our staff are EU nationals. Currently they have an automatic right to come to live and work in London but that might end if there’s a Brexit. I would be concerned that retaining the expertise I have on my team would become more difficult,” he said.

Political and business leaders in Britain and around the world have lined up to warn that Brexit will have dire consequences for the UK. President Obama is not the only Jeremiah (Prophet of Doom).  The Bank of England, the IMF, the OECD, the London School of Economics have all weighed in against Brexit. But John Scott, an American expat who works as an insurance loss assessor in the U.K., is not impressed with the warnings of almost biblical disaster.

Scott is fiercely pro-Brexit and furious at any suggestion that Britain could not prosper  outside the EU as a fully independent, self-governing nation.

“It just really galls me no end. So while I’m American I still think that what’s good for Britain is to get out and keep its sovereignty,” he said.

Correction: A previous version of this article misspelled Shara Terjung’s name. The text has been updated.