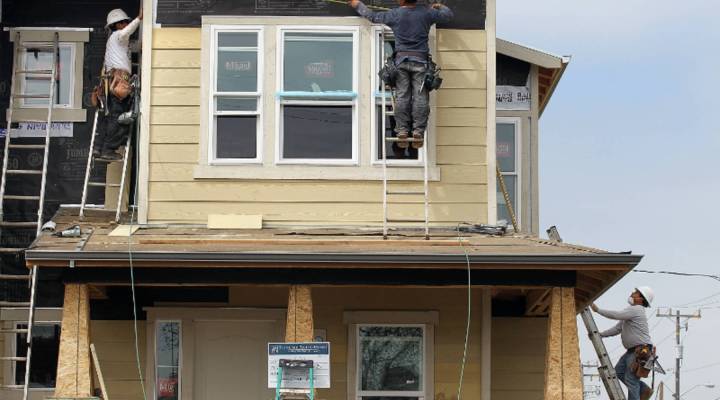 COPY
About 2.3 million construction jobs were lost during the housing crash, Great Recession and early years of the recovery. Justin Sullivan/Getty Images

About 2.3 million construction jobs were lost during the housing crash, Great Recession and early years of the recovery. Justin Sullivan/Getty Images
Listen Now

There have been some pretty good signs of economic strength in the building industry lately. New home sales have taken off this year— up 16.6 percent in April, the highest level since January 2008 — which sends a message to builders: “Build more homes!”

And construction overall has been on a tear—up 8 percent year-over-year (as of March 2016, according to the U.S. Census Bureau), with the commercial side surging past residential and the building of new hotels and offices up by double digits.

But with all this activity, nine out of 10 contractors (89 percent) now say they are having trouble filling open positions, according to a survey conducted in 2015 by the Associated General Contractors of America. The shortages are most acute among skilled, and generally well-paid, craft workers such as carpenters, electricians, sheet-metal and concrete installers, as well as among construction managers and supervisors.

AGC economist Ken Simonson pointed out that from 2007-2011, 2.3 million construction jobs (out of 7.7 million at the peak in January 2007) were lost during the housing crash, Great Recession and early years of the recovery. Only about half — 1.2 million jobs — have been added back to the construction sector since 2011. Many laid-off workers took early retirement, went on disability, joined the oil-fields boom, or started other careers.

Meanwhile, the pipeline of new workers in construction is thin. Both AGC and the Construction Industry Institute have called for more recruitment and apprenticeship programs to attract young, female and minority workers to construction, to replace an aging and mostly white male workforce.

“An awful lot of kids have been told: ‘To get ahead you really need to go to college,” said Simonson, “‘and you don’t want to do that difficult outside work.” But Simonson said that prevailing construction wages are higher than those in other occupations one can enter with just a high school diploma.

According to analysis of the Labor Department’s monthly JOLTS data (Job Openings and Labor Turnover Survey) by the Economic Policy Institute, unemployed construction workers looking for work still outnumber job openings by 4-to-1. That is higher than in most other occupational groups. Economist Elise Gould at EPI said contractors might be able to fill more of the positions that are going unfilled if they lowered their expectations and raised pay for entry-level workers.

“Employers don’t want to have to pay any more to get those workers,” Gould said. “And maybe there are some skills that employers are looking for, but they’re unwilling to train those workers.”

Ken Simonson predicts that in coming quarters, as labor shortages worsen, construction wages will spike higher and projects will take longer to complete in many of the hottest building markets around the country.