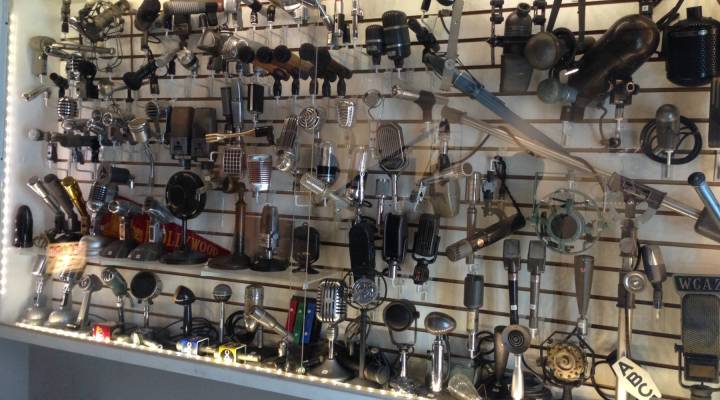 Ask any audio engineer working at Marketplace who Wes Dooley is, and you’ll quickly get an answer along the lines of “Oh yeah he’s famous.”

Now in his 70s, Dooley is the co-founder of Audio Engineering Associates — AEA for short — and he sells a range of handmade ribbon microphones, some costing upwards of $5,000. Dooley’s mics are used by musicians like Dolly Parton and Pete Townsend and younger artists such as Leon Bridges and the Alabama Shakes.

But Dooley’s success in the audio business came about, in part, because of his dedication to an antiquated technology: the ribbon microphone. Marketplace’s Adriene Hill met up with Dooley at his small workshop in Pasadena, California to learn more.

An AEA ribbon mic in the works.

Most of Dooley’s ribbon mics are not the smaller devices you’re used to seeing. These behemoths eclipse your whole face and are prone to knocking over mic stands because of their weight. Imagine the massive broadcast mics used by Orson Welles or Elvis, then you have an idea of the style of mic Dooley is known for. It was actually the old RCA 44 series microphones that he decided had to be kept alive. He started servicing the decaying 44s after RCA shut down its mic division in the ‘70s and by the ‘90s he was building them from scratch.

“In ‘98 I did what I told myself I would do: Preserve the 44, put it back into production — we already made parts for our service work for the 20 years we’d been doing that,” Dooley says.

And what about RCA? Dooley says that because the technology is so old, laws protecting RCA’s intellectual property are no longer valid.

“RCA has never, ever had an official conversation with us, the patents are all long gone,” says Dooley. “This is old technology. It’s mostly: Can you do it? You know, no one’s going to get after you if you can duplicate a stradivarius.”

So why build a company around a product that’s more expensive and time consuming to make? Well, Dooley says, because the ribbon mics just sound better. “As Les Paul said, as Chet Atkins said… ‘Once you have this mic up in front of your stuff, you don’t need another mic, it does everything.’”

Dooley says his business wouldn’t be possible without his 10 dedicated employees, and a little bit of luck.

“I had decided that, you know, if I live for a few more years, it’d be really fun to leave a legacy so my children, if they ever had children, could point and say, you know, your grandfather did that. And it turned out I was incredibly lucky, just like with the clancy brothers or my wife marrying me or having kids.”