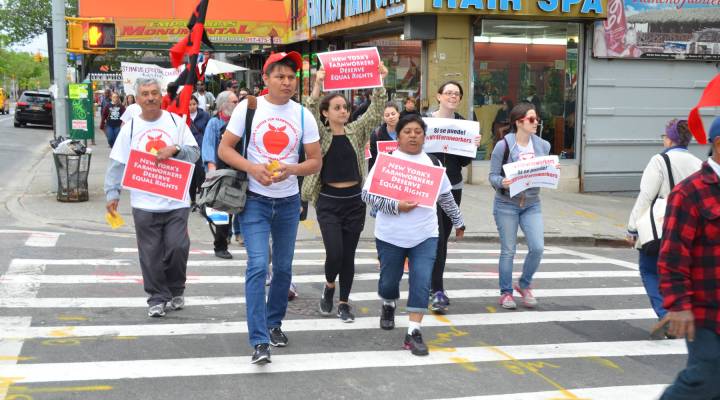 COPY
A group of farmworkers and activists is walking 200 miles across New York to advocate for a bill that would give farmworkers a day off, overtime pay, and the right to collective bargaining. Eilis O’Neill/Marketplace

A group of farmworkers and activists is walking 200 miles across New York to advocate for a bill that would give farmworkers a day off, overtime pay, and the right to collective bargaining. Eilis O’Neill/Marketplace
Listen Now

Late Saturday afternoon, farmworkers and activists made their way through Harlem and Washington Heights, in Manhattan. Their feet hurt from a long day of walking, but they were still enthusiastic – drumming, chanting, handing out fliers. A pair of them was on roller skates.

The marchers were trying to right what they see as a historical wrong. The labor laws we take for granted, like days off, were passed back in the 1930s, during the New Deal. As part of the backroom compromising necessary to get them through, farmworkers were left out. Since then, a handful of states have gone ahead and granted protections to farmworkers anyway.

But New York is not of those states. Here, farmworkers still don’t have the right to overtime pay, a day off, or collective bargaining.

“These are fundamental rights of every worker in New York State that have been denied to over 100,000 farmworkers across the state of New York,” New York State Senator Adriano Espaillat said.

One of these excluded workers is Bertha Garzón. She spent twenty-one years working on a duck farm in upstate New York.

Garzón says she had to force-feed more than 350 ducks three times a day. That meant she worked around the clock, with never more than five hours off at a time. And she only got one day off a month. A bill currently before the New York Senate would make all that illegal.

“If it was passed into law, it would essentially gut our agricultural industry,” Jeff Williams said, director of public policy at the New York Farm Bureau.

Williams says, if workers had the right to unionize, they could strike during harvest time, and farmers could lose their entire investment. Also, he adds, farmers in New York have such narrow profit margins they can’t afford to pay workers more.

“I just talked with a vegetable farmer from Central New York last week,” Williams said. “He was trying to unload a truck load of carrots. He calls up the wholesaler and distributor and said, ‘Hey, what’s the price today?’ He produced his for twenty-one cents per pound. But Michigan’s paying nineteen cents. And so the more you increase those labor costs, the more you get in that position where you can’t produce food for what you’re getting paid for it.”

It’s not clear what the economic impact of this bill would be. Some economists say California’s law, for example, led to more expensive produce and lowered wages for farm workers. Others argue those effects were negligible, and the main effect of the legislation was to reduce poverty.

For people like Richard Witt, one of the leaders of the march and an Episcopal priest, this isn’t about economics. This is about morality. He’s spent the past twenty years helping farmworkers fight.

“They want to know why they’re being treated differently than others,” Witt says. “For them, it really is about ‘treat us with dignity. Respect that we’re a key part of the agricultural system and the food system.’”

The marchers hope their protest will force state senators to bring the bill to a vote before they break for the summer.