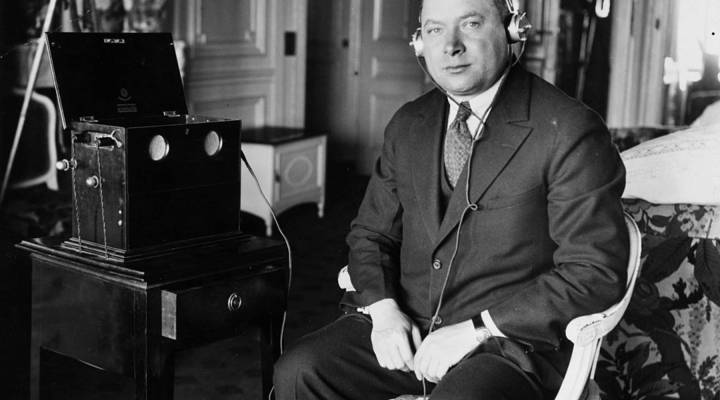 The Federal Communications Commission is gonna do a little dabbling in the electromagnetic spectrum market next Tuesday. The FCC controls the airwaves —  the radio frequencies that broadcasters and wireless companies use to get us the content we want. They’re going to buy back parts of that spectrum from traditional broadcasters, then turn around and sell it back to wireless providers.

Not the stuff of a gripping radio story, but that’s kind of the point. Because a hundred years ago, the fight over the airwaves was pretty dramatic.

More often than not it came down to a 40-year friendship between two men. A brilliant but troubled inventor named Edwin Armstrong, and David Sarnoff, the head of the Radio Corporation of America, better known as RCA.

The story is told in a new book by Scott Woolley called “The Network: The Battle for The Airwaves.” Read an excerpt below.

EDWIN ARMSTRONG HAD HIS THIRTEENTH-FLOOR LUXURY apartment all to himself for the night, just as he had planned. His wife, Marion, was staying at her sister’s in Connecticut. He had surprised their live-in cook and two maids with an extra night off work. The world-famous inventor, Ivy League professor, and multimillionare placed his handwritten suicide note on the bedroom dresser and walked to the window. He slid it open, feeling a shock of freezing winter air wash over him.

The Armstrongs’ sprawling seventeen-room apartment was the sort of place most New Yorkers dreamed of living. Known as River House for its location on the western bank of the East River, the twenty-six-story art deco tower had been designed in the Roaring Twenties to cater to the top rung of Manhattan’s social ladder. Its other fifty-five apartments housed neighbors with last names like Roosevelt, Hearst, and Rockefeller. The Armstrong apartment, set at the midpoint of the building’s A line, offered one of River House’s signature views: a panoramic sweep from Brooklyn to Queens, across Roosevelt Island, and up the Manhattan skyline running north along the water’s edge. In past summers, the river had served as convenient parking spot for his neighbors’ yachts. Tonight, a fierce wind blew upriver, speckling the dark water  with whitecaps.

To his fellow New Yorkers, the day just ended had been an ordinary Sunday—but to Major Armstrong it marked an important anniversary. Forty years ago, he had witnessed the full power of his first invention, a discovery that kicked off his career as the most prolific inventor since Thomas Edison.

On that long-ago January 31st, in 1914, a twenty-three-year-old Edwin Armstrong had embarked on an unusual adventure. Back then, the ability to send information through the air was little more than a parlor trick. Consumer radios had not yet been built, or even imagined. The only thing the airwaves were good for at the beginning of the twentieth century was zipping Morse code dots and dashes a few dozen miles—useful for communicating with ships at sea but little else. Armstrong believed he had invented a device that could change that, grabbing enervated airwaves drifting in from clear across the Atlantic and reinfusing them with enough power to make them detectable, a feat that wireless experts considered impossible.

That’s when David Sarnoff first entered the story. An acquaintance of Armstrong’s, Sarnoff shared the inventor’s youth and optimism, and was one of the few people to believe Armstrong’s idea might actually be possible. Since Sarnoff worked for a company that owned the world’s largest antenna, he offered to connect Armstrong’s device to the antenna and put his claims to the test. The results shocked even the two young optimists as they suddenly began to pick up wireless signals being sent from the far side of the planet.

From that day on, Armstrong and Sarnoff’s fascination with the untapped power of the invisible waves would bond them and set their lives on parallel paths. Armstrong’s  imagination, talent, and luck continued to astound. Following the creation of his tool to make weak airwaves stronger, he built a device that made it easy for a radio transmitter to summon the invisible waves. He followed that with a breakthrough that allowed engineers to change an airwave’s length, multiplying their information-moving power once again. Invisible waves controlled by Armstrong’s discoveries would deliver the sound of Duke Ellington’s jazz to radio listeners, the sight of Jackie Gleason’s antics to TV viewers, and the location of incoming Nazi bombers to the Allied Air Command.

Like Thomas Edison, who kept working into his eighties, Major Armstrong had maintained his passion and creativity as he had aged. Twenty years after their trip to test out his first invention, Armstrong invited Sarnoff to his lab at Columbia University to show him yet another invention, FM radio.

EDWIN ARMSTRONG’S BIGGEST MISTAKE, as he now saw it, had been his naive assumption that the David Sarnoff who showed up for the FM radio demonstration, would be the same giddy engineer who had accompanied him twenty years earlier. He knew, of course, that his friend had used their shared faith in the airwaves’ expanding power to build a wildly successful career of his own, ascending to run the Radio Corporation of America, the world’s largest manufacturer of AM radios and other electronics, as well as the National Broadcasting Company, RCA’s most famous subsidiary and the world’s largest AM radio network. What Armstrong hadn’t expected was for David Sarnoff to betray their friendship and lead a secret cartel dedicated to crippling both FM radio and the infant television industry.

When Armstrong first turned his efforts to convincing the world of those explosive allegations, following the end of World War II, he knew it would be a challenge. By then, David Sarnoff was, in the American public’s eyes, famous, accomplished, and respected. Even so, Armstrong’s task of exposing the corruption and Sarnoff’s role in it hadn’t seemed so daunting at first. After all, the inventor had spent his life revealing invisible powers to an unbelieving public.

And yet, for reasons he still did not understand, nothing worked. Not the seventeen lawyers he hired to sue Sarnoff and RCA. Not the congressional investigations he instigated. Not the accusations he leveled in the popular and the scientific press. None of it ever seemed to matter.

Why had all of his efforts to expose the corruption of the American airwaves failed?

Who was the real David Sarnoff?

Those questions had obsessed the inventor for nearly a decade, his failure to answer them slowly poisoning his marriage, his career, his life. Now, as the biting wind blowing up the East River washed over him and flooded into the apartment, he considered his options. The blueprints for River House put the distance to the rooftop below him at 108 feet 7∕8 inch. More than enough for the job, the engineering professor could easily calculate, just by eyeballing the drop.