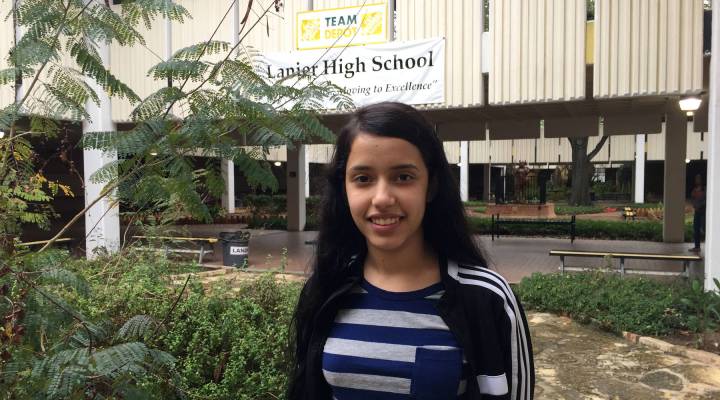 COPY
Janet Aviles, a senior at Lanier High School, missed the cutoff for automatic admission to the University of Texas at Austin. Amy Scott/Marketplace

Janet Aviles, a senior at Lanier High School, missed the cutoff for automatic admission to the University of Texas at Austin. Amy Scott/Marketplace
Listen Now

Every Wednesday, the teachers and staff at Lanier High School wear college T-shirts and sweatshirts to work. Lanier is in Austin, Texas, so there’s a lot of burnt orange – for the University of Texas.

“It just makes you wonder, ‘what if I went there?’” said Janet Aviles, a senior at Lanier.  “I could become one of them, too, like a role model.”

Most of the kids at Lanier come from low-income families and speak English as a second language. Without the rule, said principal Ryan Hopkins, his students would be at a disadvantage competing with students from wealthier high schools.

“I’m looking at about 20 kids which are guaranteed entrance into some of the most phenomenally funded research institutions in the world,” he said.

But Janet Aviles won’t be one of them. In 2009, UT Austin was so overwhelmed with top 10 percent students, it was allowed to cap automatic admissions at 75 percent of the incoming class. That means for next school year, only students who made the top seven percent of their class were guaranteed admission. Janet just missed the cutoff, and when she applied for one of the few remaining slots, she didn’t get in.

“It is very hard, if you’re not in that top seven percent,” Hopkins said. “Unless you have done extraordinary things and can present kind of a unique portfolio to the admissions office, it’s very hard to get in.”

That’s one reason a lot of Texans have mixed feelings about the law. Many talented kids don’t make the cut, especially in the highest-performing schools. That has led some families to game the system, by moving their kids to lower-achieving schools where they have a better chance.

The rule also creates a hyper-competitive environment, Hopkins said, where students are so focused on boosting their GPAs with honors classes they may miss out on interesting electives or activities.

“While we want to promote the most rigorous academic courses, we also want them to be well developed and to be exposed to many things while they’re in high school,” he said. “This percentage rule kind of puts pressure against that.”

The biggest threat to the law may come from the University of Texas itself. Earlier this year the system chancellor William McRaven asked state legislators to reconsider the policy.

“Your flagship, your number one university in the state of Texas is ranked 52nd on the U.S. News & World Report,” he said in testimony before the Texas house higher education committee. “To me, that’s unacceptable.”

McCraven argued that UT Austin’s low ranking stems partly from what is still, confusingly, known as the top 10 percent rule, because even with the 75 percent cap, the university has little flexibility to pick its own students with high test scores or other accomplishments. He also questioned how effective the law has been.

“We need to go back and look at the facts, in terms of whether or not the 10 percent rule has served Texas in the way that we hoped it would in terms of increasing diversity,” he said.

The rule was created 20 years ago, after a federal appeals court ruled that the University of Texas could not consider an applicant’s race as a factor in admissions decisions. Because Texas high schools tend to be segregated by race and ethnicity, admitting the top 10 percent of every class gave an automatic boost to African American and Latino students.

“I think it’s an ingenious way of creating racial and ethnic diversity,” said Richard Kahlenberg, a senior fellow at the Century Foundation, a think tank.

UT Austin eventually started considering race again, for those students not admitted automatically, after a 2003 U.S. Supreme Court ruling allowed some race-based affirmative action. That policy is  being challenged in a separate case now before the Supreme Court, Fisher vs. University of Texas.

“We know that the vast majority of African American and Latino students who get into UT Austin do so through the top 10 percent plan, rather than through the use of race in admissions,” said Kahlenberg.

Research has shown that, once enrolled at UT, those students traditionally have performed as well as, or better than, students from Texas high schools who got in without making the top 10 percent. According to UT data, students admitted through the top 10 percent rule consistently have earned higher grades in college, except during a brief period before the cap was enacted, when those students made up as much as 86 percent of the class and competition intensified for the remaining slots. Until 2008, graduation rates were also higher.

So how diverse is UT Austin now? Last year 4.2 percent of undergraduates identified as African American or black, about the same percentage as 20 years ago under affirmative action. Hispanic and Latino students make up 22 percent, up from 14.5 percent, though researchers have pointed out that’s largely due to population growth.

“We also know that UT Austin is much more socioeconomically diverse than it would have been without the top 10 percent plan,” said Kahlenberg.

The outcome of the Fisher case could change that equation. The compromise that allowed UT Austin to cap the number of students admitted automatically came with a caveat:  If the Supreme Court were to rule against UT’s use of race in admissions, the 75 percent cap would be lifted. That could open the whole policy up for debate once again.

Meanwhile Janet Aviles, the senior at Lanier High School who dreamed of going to UT, has moved on. She’ll start at Texas State University in San Marcos in the fall.

“I guess things happen,” she said. “You just have to keep working to become what you want to become in the future.”