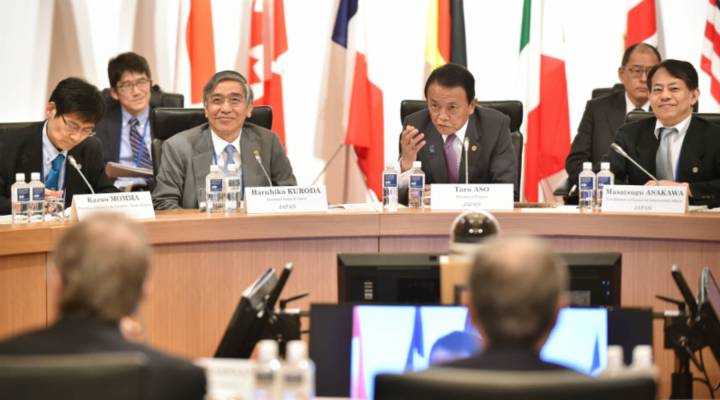 Central bankers and finance ministers from the G7 countries are meeting in Japan on Friday and Saturday as part of the lead-up to a G7 summit next week. The Group of 7 includes Japan, Germany, France, Italy, the U.K., Canada and the U.S., which collectively account for more than half the world’s GDP.

The global economic issues on the table this week are daunting: instability in the markets, low growth and low or negative interest rates, debt and poverty, plus the pesky issue of offshore accounts and tax evasion. Or, as the official agenda calls it, “promoting integrity of cross-border financial flows.”

Japanese Prime Minister Shinzo Abe will be walking a fine line: Japan has been dealing with the problem of deflation for more than 20 years, and his economic program, referred to as Abenomics, hasn’t panned out as many had hoped since his election.

“What has happened lately is that there has been a lot of skepticism about the ability of Abenomics to deliver,” said Mireya Solis, Philip Knight Chair in Japan Studies at the Brookings Institution. “Because growth is very weak, consumption is not picking up, and neither has the inflation target been met.”

Sluggish growth has real effects for Japanese citizens; as the population ages, younger people see fewer options, and Japanese women in particular have struggled to get ahead.

“What was originally called a lost decade is now two and a half decades,” said Nancy Snow, Pax Mundi Professor of Public Diplomacy at Kyoto University of Foreign Studies in Japan. She said poverty is still a huge issue in the country, and proposals geared toward structural reform haven’t been popular with the public as a solution to poverty. “The administration, to some ears, sounds like it’s more about liberalizing the sector to make it more profitable for certain businesses.”

The Japanese central bank is so desperate to spur growth that they’ve gone over to negative interest rates, and Japan has suggested it would like to devalue its currency to promote growth — which doesn’t sit well with the U.S. The aspect of Abenomics that calls for structural reforms and economic liberalization has been very slow to materialize, which NYU Stern Business School professor Gian Luca Clementi said is key to growing the country’s economy.

“There are lots of small banks that give loans on very dubious criteria, and lots of companies that are definitely not the most productive, but they are entrenched politically. [They] receive continuous financing for projects of dubious productivity,” he said. “On the other hand, smaller entrepreneurs, younger entrepreneurs have a harder time getting financing.”

“This is also an election year in Japan, not only the United States,” she said. “And the government, obviously concerned about the state of the economy, is already increasing its level of public expenditures.”

The countries aren’t likely to reach any groundbreaking agreements on these questions: A spending and stimulus approach is a tough sell with the G7, particularly Germany and the U.K., who have austerity agendas.

The biggest thing likely to dominate the news this coming week will be President Barack Obama and Abe’s joint visit to Hiroshima. Some in Japan have demanded an apology from the president for the lasting effects of the atom bomb.