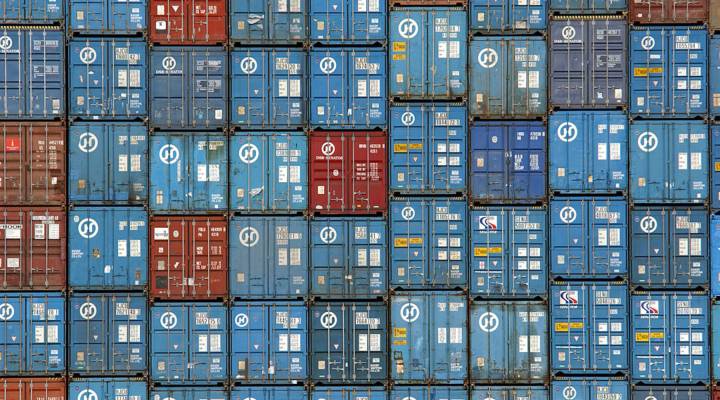 COPY
Thousands of truck-sized 30-ton shipping containers are stacked aboard the Hanjin Oslo freighter in the Port of Los Angeles in 2002. David McNew/Getty Images

Thousands of truck-sized 30-ton shipping containers are stacked aboard the Hanjin Oslo freighter in the Port of Los Angeles in 2002. David McNew/Getty Images
Listen Now

A pending trade agreement between the U.S. and 11 other countries would have only modest economic benefits, according to a newly released assessment by the U.S. International Trade Commission.

“That’s about a month or two of GDP growth,” said Jared Bernstein, a senior fellow at the Center on Budget and Policy Priorities.

“That would be a pretty disappointing month, if we heard that on one of those monthly jobs reports,” said Bernstein. “As my grandma would say, that’s ‘bubkis.’”

But he said while “you certainly wouldn’t make this deal on the basis of growth numbers like this,” it also doesn’t necessarily mean the agreement is a bad one.

“This is not a black and white decision,” said Susan Ariel Aaronson, a professor at George Washington University. “The TPP is a huge trade agreement. It has 30 chapters and many of those 30 chapters are not really discussed in this report because they can’t be modeled.”

The ITC’s task, mandated by Congress, is to consider the economic impact of the deal. In addition to its other findings, the agency estimated U.S. annual income would be $57.3 billion higher with the TPP after 15 years.

“There aren’t a lot of policies that Congress can vote on that will deliver that kind of annual growth,” said U.S. Trade Representative Mike Froman in a call with reporters after the report’s release.

“This is not just one year’s gains, but a stream of gains that will continue every year thereafter,” said Peter Petri, a professor at Brandeis University, who has done his own assessment of the TPP. He said economic gains from TPP would be modest, but still “numerically significant.” Referring to the immense size, he said the U.S. economy “is like an ocean liner. It dwarfs the impact of any single policy change.”

While Petri believes the ITC estimates to be conservative, critics of the deal are concerned even these small numbers might be overly optimistic.

“You have to think about the usefulness of the deal in other contexts,” said Bernstein, listing geopolitics, the roll of China in the global economy, the way disputes are going to be settled between trading partners and currency manipulation, among others. “All the kinds of the rules of the road that are embedded in these trade agreements. That’s how you should decide whether this is a deal worth signing or not,” he said.