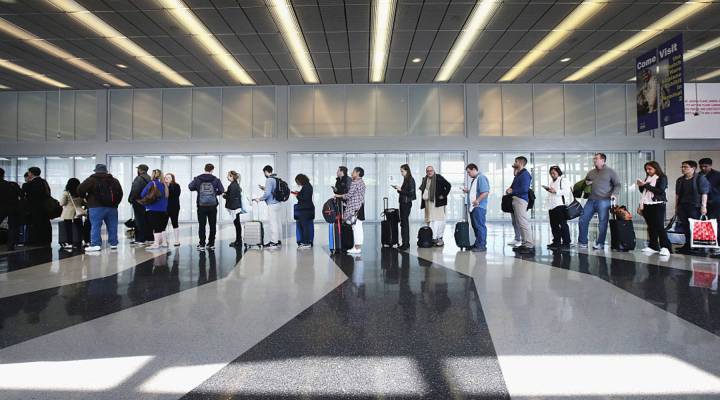 COPY
Passengers at O'Hare International Airport wait in line to be screened at a Transportation Security Administration (TSA) checkpoint on May 16 in Chicago, Illinois. The long lines have been blamed for flight delays and a large number of passengers missing flights completely. Scott Olson/Getty Images

Passengers at O'Hare International Airport wait in line to be screened at a Transportation Security Administration (TSA) checkpoint on May 16 in Chicago, Illinois. The long lines have been blamed for flight delays and a large number of passengers missing flights completely. Scott Olson/Getty Images
Listen Now

The problem with security delays at airports now is so bad, you don’t even have to be passenger to see it.

“Everyday it’s been getting worse and worse,” said Cathy Perez, a sales associate at Tumi, a luggage store in LaGuardia airport’s Terminal B, about the security line. It often snakes past her workplace, around a corner and and down a corridor. Mornings, she said, when hundreds of frustrated passengers are stuck, and griping, are the worst.

Halfway across the country, at Chicago’s O’Hare International airport, financial services worker A.J. Kahling said while trying to get through security for an early Sunday morning flight, he got stuck in a line so long it extended almost outside the terminal to the drop off lane. “Everybody has been to Disney World. This was longer than any Disney World line I’ve ever seen,” he said. “They ran out of the barriers.”

As soon he saw the length of the line Kahling said he was resigned to his fate.”I knew I wasn’t making my flight,” he said. Other travelers however, were trying to speed things up, but most without luck.

“You kept on seeing people tapping shoulders of the people in front of them asking if they — hey my flight’s at this time can I move ahead of you,” he said. “But all of our flights were leaving within a twenty minute window so we were all in the same position.”

The line was so long it took Kahling an hour and a half to get through. At which point he only had minutes to run to his gate.

“It was like that scene from Home Alone,” he said. “Where they’re running through the terminal trying to make their gate.”

Kahling missed his flight that day. And concern is growing that more passengers like him will be stuck with their feet on the ground, waiting to empty their pockets and take off their belts, instead of folding themselves over to squeeze into cramped aisle or window seats, and waiting for touchdown.  As we get into the summer travel season, lines at airport security are getting longer. Airlines for America, an industry association representing airlines, says summer air travelers are expected to hit an all time high — 2.5 million passengers a day on U.S. airlines. But even as the number of air travelers is growing the staffing budget for TSA is the lowest it’s been in half a decade. For travelers – that means extra long wait times to get through security.

But passengers are not the only ones frustrated by security delays. Airports don’t like them because when passengers are stuck in line they are not buying overpriced bags of chips or chef salads served with a spork. Then, of course there are the airlines.

“Do you hold that flight and possibly risk it being late into wherever it’s going?” said Henry Harteveldt, founder of Atmosphere Research, a travel industry research company. On the one hand, empty seats cost airlines a lot, but on the other,  so do fliers who are angry because their flight was held to wait for passengers stuck in those long lines.

For airlines, security delays can mean problems the likes of which might stump King Solomon.

“If you have 20 or 10 or 30 people for a flight that have not yet shown up, but you know that they’re in the airport, you show that they’ve checked in — do you leave those people behind and if you do, how will you possibly get them to where they’re going when your other flights are already full,” said Harteveldt.

Delta has offered to lend the TSA experts to consult on how best to redesign checkpoints for better flow. And both American Airlines and Delta are looking at bringing in contractors to help with non-screening functions – like directing traffic at checkpoints or managing those grey plastic tubs that hold our laptops and loose change.  The Port Authority of NY and NJ is threatening to privatize security. Senator Chuck Schumer wants to increase the number of bomb sniffing dogs at New York City airports to help reduce delays. But Harteveldt says really, everyone’s hands are tied by bureaucracy. Airlines, airports and passengers alike are completely at the mercy of the government including the TSA which relies on congress for its funding.

“The TSA is a government agency. It is part of the Department of Homeland Security. The airlines do not control TSA,” said Harteveldt. But it is the airlines that have to deal with the public.

“Airlines have a time pressure in customer service that most business do not have,” said Jay Baer, a customer service consultant. “If you miss a flight you need assistance immediately, not tomorrow, not a week from now, not 30 days from down,” he said. “When you have an upset customer, especially an upset customer that’s traveling, answering quickly is the most important condition.”

Even though their hands are tied, the most important thing an airline can do, notes Baer, is to respond to grumpy passengers quickly. Answering with empathy is next.

“Because people actually want to believe that the airline cares that they’re having this less than ideal circumstance. And then the third condition is to provide some sort of resolution. And then here’s where I think airlines have a real problem today,” he said.

Even if airports try to create a fix by privatizing security, there’s an application process, said David Primo, an associate Professor of Political Science and Business Administration, at the University of Rochester’s Simon Business School. Homeland security needs to run a cost benefit analysis. This can take up to six months. And, privatizing isn’t always a magical fix to bureaucratic woes.

“Private screeners have to live by the same regulations as TSA screeners,” Primo wrote in an email. “Shoes will still have to come off, and tiny (but not tiny enough) tubes of toothpaste will still have to be confiscated!  To really fix aviation security, we need a wholesale review of the entire process, from start to finish. I’m not holding my breath.”

The TSA says congress has agreed to put further planned cuts to screening forces on hold for this fiscal year. And, that it’s requested more than 300 additional screeners in its next budget. But it also says, at some airports, adding additional workers might not help as airport space for security operations is maxed out. “Think of a funnel,” says a TSA statement.

Airlines for America and the TSA say for the time being you should plan to arrive at the airport two hours before domestic flights. Which is what A.J. Kahling did. He had another flight this week and got through security in just 23 minutes. This leaves him about an hour and 45 minutes before his actual departure time.

“By my calculations that means at least one Chili’s margarita for me and my wife,” he said. “Don’t judge us. We’re on vacation.”

For now Airlines for America says it has two travel tips: enrolling in precheck to make the screening process faster and remembering to pack your patience.