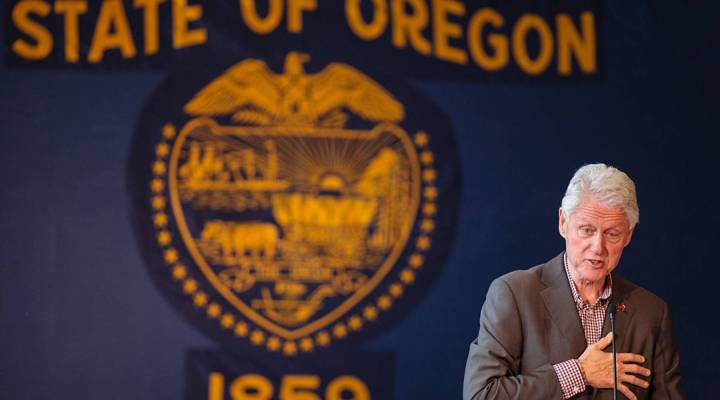 Hillary Clinton has been campaigning in Kentucky this week, promising to create more economic opportunities for the coal miners who are going out of business.

Meanwhile in Oregon, the other state voting Tuesday, the economic picture couldn’t be more different. It had the best performing economy of any state last year, according to a combination of metrics tabulated by Bloomberg, which called Oregon “the picture of economic health.”

So what’s going on up there? Oregon’s economy tends to be hit harder by recession, but it runs hotter on upswings, said Tom Potiowsky, director of the Northwest Economic Research Center at Portland State University. That rapid recovery has been helped along by many young workers who have flocked to Portland in recent years.

“The state has this seemingly unflappable gravity, especially for young folks,” said Mike Paruszkiewicz, an economist at the center. Even during the recession, Oregon gained population, which has helped cushion it during the recovery. The state, and Portland especially, has gained a ton of buzz in the past five years or so, thanks to a vibrant food, beer and art scene (see also: “Portlandia”).

“All that in-migration has set up this perfect storm of self-perpetuating migration affordability and urban transformation,” Paruszkiewicz said. “And that’s been pretty interesting to watch.”

Unemployment is below the national rate, and the state is adding a variety of jobs at a nice clip. Oregon also boasts a healthy tech manufacturing base, Potiowsky said. That’s despite recent layoffs at Intel, the state’s largest private employer. Plus, there’s medical marijuana, which will likely give the economy a nice boost once recreational sales are fully rolled out. Paruszkiewicz said they’ve observed pent-up (legal) demand.

Unlike some of the southern states, where prosperity in cities belies strife across the rural communities, Portland has far and away been Oregon’s economic engine. Other parts of the state, known for ranching, logging and outdoor sports, are trailing but recovering.

Paruszkiewicz compared the state’s growth to a helium balloon floating to the ceiling, and that he’s preparing for growth to plateau as the state hits full employment.

“How are we going to transition … from the really strong recovery we’ve gone through — probably a unsustainable recovery — to a more sustainable level of growth?” Paruszkiewicz said.

So what are Oregonians worried about? Well, there’s the state’s recently passed minimum wage hike, which sets wages at three tiers for different parts of the state and will be implemented over the next six years. There’s also a new set of big-city problems that comes with the influx of people into Portland, like building affordable housing in a tight market.

Finally, there’s a growing sense of urban/rural divide across the state, which is still dealing with last winter’s standoff between police and an anti-government militia in rural Oregon.

“It’s a land-use issue. Here [in Portland] it’s ‘can people have homes?'” Potiowsky said. “In the rural areas it’s also a land issue but there’s a different tone. ‘I have this land, I want to be able to make money off my land, I can be a steward to my land but I feel like the federal government is telling me how I have to use my land.'”