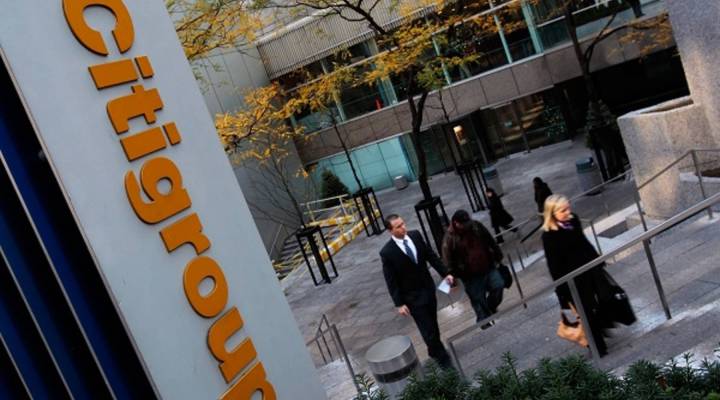 COPY
Citigroup, along with other big banks, is offer a service-oriented gap year to its new hires.  Photo by Chris Hondros/Getty Image

Citigroup, along with other big banks, is offer a service-oriented gap year to its new hires.  Photo by Chris Hondros/Getty Image
Listen Now

A big bank is offering its new hires something unusual: a gap year. Citigroup is launching a program in which some incoming analysts will delay their start date at the bank for a year so they can work for nonprofits after graduating from college.

This comes as Wall Street is increasingly worried about attracting and retaining young talent. Not long ago, big banks had their pick of top undergrads. But with their reputations hurt by the financial crisis and tech careers appealing to today’s graduates, banks are having to work a lot harder. Citi’s betting that offering a year of service will make it more competitive in recruiting a generation that is believed to place a high value on service.

One of Citi’s hires taking part in the program is Kevin Miranda. The senior graduating with a degree in international studies from Boston College has volunteered in Peru, where he taught English to students with limited resources. He also went to low-income communities in Ecuador during a school break, connecting with young students and learning about community development.

He said a key interest for him is working on the problem of education inequality in the developing world. The chance to be at a nonprofit before banking was important to Miranda’s choice of employer.

“I knew this essentially would give me the best of both worlds,” Miranda said. “I think having both those experiences could help me develop as a person and as a professional and help me get some really good perspective on what I think I should do to impact the world.”

Citi is offering this program in partnership with a nonprofit called ServiceCorps. (The organization recently changed its name from Service Year.) Citi will pay Miranda 60 percent of his base salary during the year, where he’ll work to grow opportunities and partnerships for charitable organizations. Then he’ll start work at the bank.

There’s a warm and fuzzy altruistic exterior to this, but beneath it are hard business realities. Banks need to draw the smartest students to win.

“This is the future of the firm,” explained Raymond McGuire, Citi’s global head of corporate and investment banking. “The generation wants to make a difference. They want to make certain that the talents they have, the skill sets that they develop can be deployed in the workplace, but importantly, outside of the workplace as well.”

The year of service is a pilot for now. It’s part of a larger program aimed at keeping Citi’s young bankers happy, including opportunities for current employees to do shorter service projects, emphasis on work-life balance and faster paths to promotion. Other banks are also making changes to appeal to millennials.

Changing attitudes about Wall Street careers are on display at Princeton University, historically a fertile recruiting ground for Wall Street. Nearly half of 2006 Princeton grads with full-time jobs worked in finance and insurance. For the class of 2015, that number was down to only 21 percent. More and more companies that come to campus are responding to changing interests by making service opportunities part of their pitch to students.

“They look at the opportunity to do something radically different, something that might have a strong service streak, and they see it as a particularly low-risk period in their career,” explained Pulin Sanghvi, executive director of career services at Princeton. “They don’t think of service as specifically being a path that will lead them somewhere specific, but instead think of it as a mindset and a lens that will help to shape the professionals that they turn into.”

Sanghvi said big consulting firms are also experimenting more with letting new hires do service before their start date. And companies of all kinds are offering employees time to use their skills for social good.

Wall Street is slowly realizing how the recruiting game is changing. What’ll be interesting to watch is whether this new generation of bankers actually changes Wall Street itself.