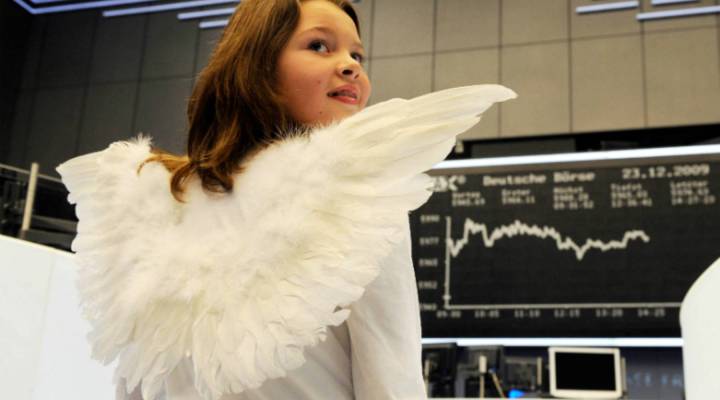 COPY
The only people allowed to be venture capitalists were accredited investors who made $200,000 per year or had a net worth of at least $1 million. THOMAS LOHNES/AFP/Getty Images

The only people allowed to be venture capitalists were accredited investors who made $200,000 per year or had a net worth of at least $1 million. THOMAS LOHNES/AFP/Getty Images
Listen Now

A new kind of crowdfunding campaign launched on Monday: For the first time, companies will be able to seek out small investors by using a similar model as Kickstarter and Indiegogo.

It’s a big shift. Because of an 80-year-old law passed after the financial meltdown of 1929, the only people allowed to be venture capitalists were accredited investors who made over $200,000 per year or had a net worth of at least $1 million.

The Jumpstart Our Business Startups or the JOBS Act of 2012 opened up crowdfunded investing to people of almost any income.

“Today you can actually raise money just from regular people which is monumental,” said Georgia Quinn, founder and CEO of the online filing service iDisclose, a service that helps businesses file to raise equity through crowdfunding. They wrapped up their first filing within hours of the new regulations going into effect Monday morning for a small distillery in West Virginia.

A company can now raise up to $1 million over 12 months through crowdfunding, which Quinn said is huge for local businesses without access to big investors.

“For most people in America, a million dollars is a lot,” she said.

The model might be best-suited to companies with understandable products and a loyal customer base, or a strong potential customer base. Aaron Pollak, CEO of Venture.co, an online investing brokerage service, said businesses with a product customers can recognize are the best fit for this.

“If you’ve got the next brilliant molten metals technology for 3-D printing or the next greatest silicon chip design, then it’s probably not a great fit for crowdfunding,” Pollak said.

The old limits existed in part to protect people from having their money squandered, and some have raised concerns that the new rules open up lower-income people to fraud, and loosen restrictions intended to keep large companies from exploiting small investors. The AARP has said that older people might be particularly vulnerable to sham investments.

Small business advocates say the rules are a fair way to connect potential investors to companies for whom an angel investor or wealthy venture capitalist might be a far reach.

“For even many successful entrepreneurs, a lot of them do not have access to these very closed venture capital and investment networks,” said Karen Kerrigan, head of the Small Business & Entrepreneurship Council.

The SEC took three years to publish 685 pages of final rules that limit how much people can invest based on income, and require disclosures from companies. They have to go through registered brokers or approved online portals.

Of course, there is still risk. Most startups fail, and many small businesses struggle to maintain profits.

“In reality, nobody knows what company will go big and what will fail,” said Vicent Petrescu, CEO of truCrowd, one of the online portals. He said investing is always very risky; the difference now is you can try your hand if you have $100, not $100,000.