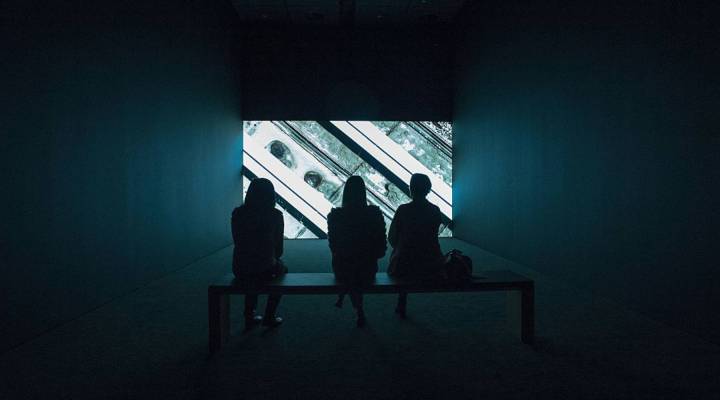 COPY
People watch an art piece entitled "Shadow Sites II" by Jananne Al-Ani, inside the San Francisco Museum of Modern Art in San Francisco, California on April 28, 2016. The newly redesigned museum integrates a 10-story expansion in a new building and will open to the public on May 14, 2016.  JOSH EDELSON/AFP/Getty Images

People watch an art piece entitled "Shadow Sites II" by Jananne Al-Ani, inside the San Francisco Museum of Modern Art in San Francisco, California on April 28, 2016. The newly redesigned museum integrates a 10-story expansion in a new building and will open to the public on May 14, 2016.  JOSH EDELSON/AFP/Getty Images
Listen Now

After nearly three years and more than $300 million, the newly expanded San Francisco Museum of Modern Art opens to the public May 14.

In even those three short years, San Francisco has changed a lot. Tech has deepened its foothold on the city. The neighborhood around SF MOMA, located just steps from Market Street and blocks from the financial street, has itself been under near-constant construction. LinkedIn has a new 26-story headquarters and a parade of condos have sprung up around the museum.

Add to that the fact that attendance at museums and visitor-serving organizations like them has been trending down or flat, and SF MOMA has a struggle on its hands: how to attract attention in a digital city full of people always looking at their phones?

The architect behind the expansion says the goal of the museum is to be “welcoming” to everyone. The original SF MOMA was about 45,000 square feet — the expanded museum is triple the size, and boasts 40,000 square feet of space that’s free to the public.

Those spaces feature lots of art for people to look at, from a massive mural by Sol Lewitt to a mobile by Alexander Calder and a lobby that holds two gigantic rusted-steel coils sculpted by Richard Serra.

But before the museum could welcome anyone, the architects at Snohetta, the firm in charge of the expansion, had to figure out where to actually put that expansion.

“So, we needed to add onto this building, and it was quite difficult because there was no apparent area to make an expansion into,” said Craig Dykers, the project lead and co-founder of Snøhetta. “So we found space to the rear of the building, which had been a kind of alleyway and a loading dock, and we consolidated all that space and in a way pulled a rabbit out of the hat and created this very clean structure.”

The new structure is white and rises up behind the terraced red brick of the original museum. The white of the expansion complements the almost white oculus in the center of the old museum.

“We like to say that the buildings are dancing partners,” Dykers said.

Tech enters the picture with the building materials; the panels on the outer facade of the new building were made using techniques only available in the last five years, Dykers said. Each panel is unique, created by a machine from a mold. The panels are stacked together loosely, giving the building the look of a deck of cards that’s been shuffled together but not squared off.

“Digital technology is a challenge in relationship to museums today,” Dykers said. “Because any people come to museums and just immediately start taking photographs of the art with their phone or start Instagramming their experience rather than slowing down and taking a look at the work.”

Inside, light switches, control panels and vents are hidden. Spaces are airy and clean, the hallways are huge and open, and there are wall-sized windows and outdoor terraces so the San Francisco skyline is part of the experience.

And there’s plenty of tech inside, too, mixed in right alongside the art, which is a new model for art museums.

The museum received a large grant from Bloomberg Philanthropies that it used to create digital installations, and it partnered with San Francisco tech companies to create them. There’s an Adobe-powered digital selfie station in the photography gallery (and a Sightglass local-roast coffee bar nearby), and the painting and sculpture galleries have interactive touch screens, digital video tables and a video theater.

SF MOMA also partnered with a local startup called Detour to redo its audio tours. Detour makes tech that uses the location of your phone to sync an audio tour — it starts when you start, stops when you start, and can even sync a tour within a group.

Keir Winesmith, the head of digital projects at SF MOMA, said they tried to make a variety of tours that would interest lots of people, using voices from HBO’s “Silicon Valley,” some San Francisco Giants, the high-wire artist Philippe Petit and apparently even some Druid priests.

As for the art itself, the museum is taking risks there, too. The works get more contemporary as you climb, and the top-floor gallery features a really experimental space where artists can move walls around, screw things into the floor, hang them from the ceiling and play with what Dykers calls “challenging” work.

Visitors to the museum, like Rosanna Romaro, an art student from Houston, admired its contemporary themes — Romaro said most modern art museums tend to be 10 years behind, but SF MOMA commissioned some new installations dated 2016.

One is called “New Work,” by Portuguese artist Leonor Antunes. It’s a sculpture that fills a gallery, and you can walk on its patterned cork floor, through hanging geometric partitions in red, black and white, suspended black leather sculptures and woven nylon ropes and fabric hangings.

Personally, I fell in love with a more classic piece: “Untitled Blue Monochrome” by Yves Klein. It’s a simple brilliant blue canvas painted in 1955, but even it has a San Francisco story of innovation. Klein developed and patented the blue color (he called it International Klein Blue), and his piece “Leap Into the Void” was basically a Photoshopped photograph long before that actually existed.

It would seem SF MOMA is already fitting right back in.