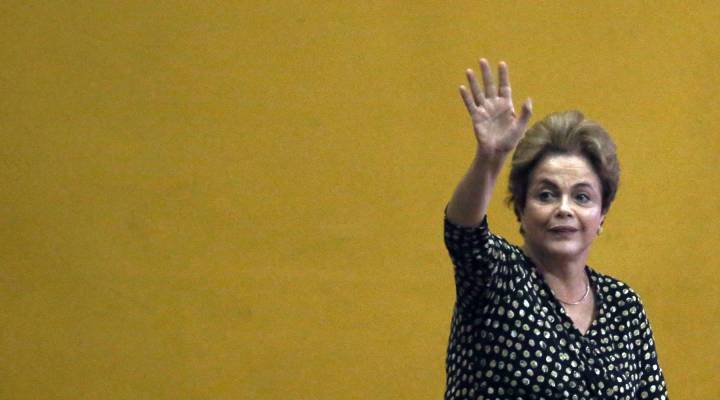 COPY
Embattled Brazilian President Dilma Rousseff waves as she enters to speak at a women's rights conference on May 10, 2016 in Brasilia, Brazil. Mario Tama/Getty Images

Embattled Brazilian President Dilma Rousseff waves as she enters to speak at a women's rights conference on May 10, 2016 in Brasilia, Brazil. Mario Tama/Getty Images
Listen Now

Brazilian senators are expected to a vote to impeach President Dilma Rousseff as early as Wednesday evening. That means Rousseff will have to step down for up to 180 days while she stands trial for allegedly manipulating the country’s budget figures.

The turmoil comes as Brazil is in the midst of its worst recession in decades.

“The Brazilian economy is in free fall, facing what is probably its worst economic crisis ever, caused by a complete loss in confidence from investors, from consumers,” said Paulo Sotero, who directs the Brazil Institute at the Woodrow Wilson International Center for Scholars.

Sotero says this crisis is largely of one of Brazil’s own making, “produced by miscalculations, by irresponsibility, by incompetence, by a series of very bad decisions in Brazil.”

Corruption has been widespread, including a big scandal at the state-owned oil company. President Rousseff is accused breaking budget laws, which she denies.

The vote could be a turning point of sorts.

“There a new disposition in the country, in society, to address this issue of corruption in high places in Brazil,” said Sotero.

Vice President Michel Temer is poised to replace Rousseff. He has low approval ratings with Brazilians, but appears committed to reforms.

“This is the business community’s sense in Brazil that anybody but Rousseff is a positive alternative,” said Harold Trinkunas, director the Latin America Initiative in the Foreign Policy program at the Brookings Institution. “We’ve seen a pattern where every time there’s news that the impeachment process advances, markets rally in Brazil and Brazilian currency rallies.”

Resolving those issues will be key to Brazil’s long-term economic recovery.