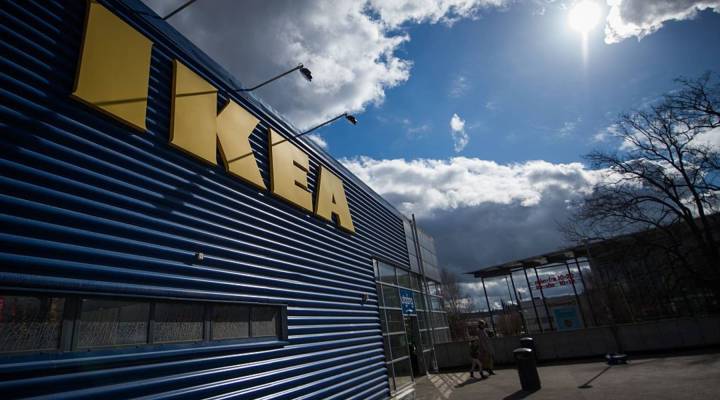 Foot traffic at department stores and malls is down nationwide, as brick-and-mortar stores try to attract customers and hang on to sales in the face of e-commerce encroachment.

While retail sales have been rising in the 3 percent-per-year range since 2010, online sales are increasing by 15 percent or more annually. Macy’s, Wal-Mart, Staples and other national chains have announced plans to close or downsize store locations, even as they invest heavily to expand their commerce operations. Yarrow said retailers still want clientele to walk through its stores, being served by sales staff.

“They also have the pressure of someone helping them, which a lot of times creates this sense of obligation,” Yarrow said. “And it can result in a more immediate purchase with less shopping around.”

Even as many store chains struggle under the online onslaught, some major legacy retailers are thriving. The Swedish furniture chain Ikea is expanding its brick-and-mortar footprint across the U.S., developing new stores in Las Vegas, Nevada, Memphis, Tennessee, and Columbus, Ohio. Store visits are up more than 7 percent year-over-year. At the same time, Ikea is expanding aggressively online, with e-sales up 21 percent.

Allessandra Zini, manager of the store in Portland, Oregon, explained the company’s strategy as follows: Ikea wants to be “the multi-channel leader in life-at-home.”

The company was late to ramp up its website for online sales and to offer a full range of products. But now it’s all-in. Zini said the company is experimenting with hybrid retail modes: “click-and-collect” pick-up sites for online sales, and an interactive platform allowing customers to do home-design on the web.

“The reason why the customer will continue to come to our store — inspiration,” said Zini. “We are not imaging an online website that can give you the inspiration that we can create by showing a room setting.”

Ikea has some distinct advantages: demographics and exclusivity. The company caters to web-savvy Millennials who need affordable furniture to fit into their small, unaffordable apartments. And only Ikea sells Ikea furniture, so consumers can’t comparison-shop and then purchase at a discount from a rival distributor.

Plus—Ikea has fashioned itself as a shopping destination. “When you come to the store you want to have a fun day out for the entire family,” said Zini. “We have a kids area, we have a restaurant.”

“Food is finding its way into everything,” explained Herb Heiserman, an architect and principal at the retail development firm Streetsense, based in suburban Maryland.

“I’m not saying you’re going to see a whole restaurant in a J. Crew store,” he said. “But you’re seeing a combination of retailing and food offering—environments that extend the stay of the customer.”

Heiserman said many struggling retail chains are trying to keep their best stores open—those in major metro areas, upscale malls and hip urban neighborhoods. That’s so their brands can be seen and noticed. “People still need a home base to touch down and connect with the brand,” he said. “And I don’t believe you get that 100 percent online.”

To present the brand, Heiserman said retailers will increasingly try to offer “experience” rather than a lot of inventory. As an example of the trend, he pointed to the up-and-coming men’s clothing brand Bonobos—where customers visit a brick-and-mortar “guideshop,” rather than a store, to try on sizes and styles.

“You’re really going into a billboard for the store. Designed very nicely, a nice experience, but you’re not coming home with the product,” Heiserman said. “These retailers are going to go towards distribution centers, not unlike Amazon. Rather than seeing it online, you’re going and touching it, and feeling it and sitting in it. And then it comes to your door.”