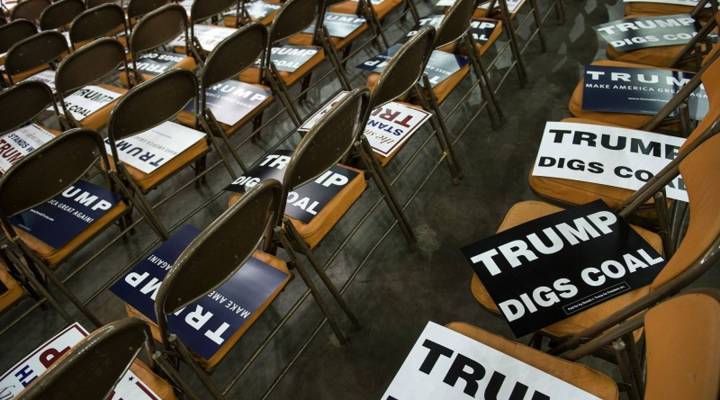 The reality of the market, however, suggests many West Virginia mining jobs — whoever is president — will never come back.

For West Virginia coal, cheap and efficient natural gas is leaving it behind as a fuel for generating electricity. Many analysts project natural gas could remain in the range of $5 per unit of energy longer term.

Graphic via the West Virginia Center on Budget &amp; Policy

The reality has pushed four of the top five coal producers in the country into bankruptcy proceedings. But let’s imagine natural gas somehow struggles. Energy markets are, after all, volatile. The problem is, U.S. demand for electricity in general is soft.

“In fact, it’s been almost flat demand since the Great Recession,” said energy economist Robert Godby of the University of Wyoming, “due to LED light bulbs, a lot of energy efficiencies. Also, the structural changes that are going on in the American economy. We don’t have as much manufacturing and high electricity demand sectors as in the past.”

“The coal seams are just getting thinner, so that means productivity is declining,” said Ted Boettner of the West Virginia Center on Budget Policy. “So we can’t produce as much coal with the same amount of people. We’re just getting outcompeted by places like in Illinois and out west.”

Related: Where will out-of-work coal miners go? In West Virginia, it’s not clear.