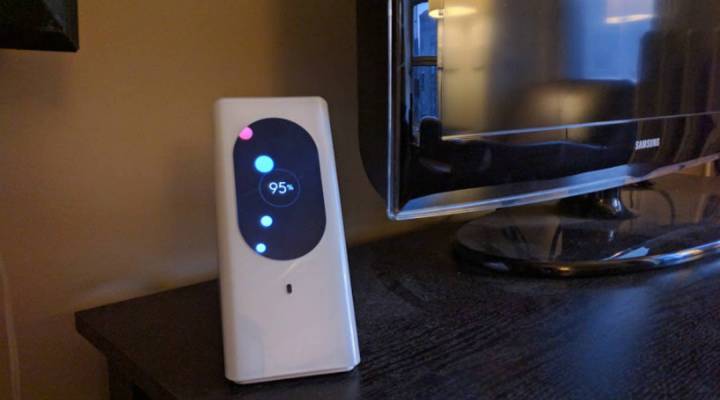 COPY
A look at the Starry Station router. Ben Johnson/Marketplace

How much would you pay to stop having to howl into the darkness every time your Wi-Fi signal is on the fritz? $350? That’s the cost of the Starry Station, one of two new products from Starry, a company in Boston hoping to make a big impact on home internet use.

Starry Station is marketed as being for anyone who has ever been frustrated by their home Wi-Fi…a.k.a. everyone. I live in an old building on the top floor. That building is in New York City — more specifically Brooklyn — where things aren’t always done “to code.” Which is why I’m skeptical of the cable cords draped over my rooftop, swaying in the breeze in front of one of my windows. I also benefit from basically having one and only one company that provides my block with internet service. Good times. When it’s rainy, when the wind blows, when a cloud moves in front of the sun and the lights on my Time Warner Cable-provided modem router start to blink, my eye starts to twitch.

Starry Station is meant to remove this frustration by giving you better information about how your Wi-Fi is doing. Usually when my internet goes out, I have three options: Wait, power cycle my router, or call my service provider. When I plugged in the Starry Station about a month ago, I immediately had some new options.

For starters, I could look on the gadget’s touchscreen to see an actual real-time “Health Score” of my signal (there is also an app, if you want to stay on the couch). This score is pretty responsive to changes in signal, but maybe more interesting is the fact that a bunch of orbs representing connected devices float around it. The color of the orbs change depending on strength of signal: blue for good, red for weak. They also change in size depending on what percentage of your network they’re using. Essentially, you can always see how many devices are connected, how they’re doing, and whether your overall network is having problems.

The more you interact with Starry Station’s touch screen, the more information you get. There are graphs of connectivity over time, tips on reconnecting particular devices, bite-sized lines of information about uploads and downloads. You can do an Ookla Speedtest at a moment’s notice and get quick feedback. You can ask the company to give you a call to help troubleshoot. (I got in touch on a Sunday and they got back in about four minutes.) You can also set a network name and password and easily show it to other people wanting to connect.

After a few weeks of use, Starry Station became weirdly comforting, mostly because it was giving me floating blobs of information at all times, with its network Health Score and connected device dots. There’s no question that it felt more useful than my TWC-supplied router/modem’s blinking lights (the Arris DG1670A doesn’t have great reviews), especially when I had an issue.

But here’s the problem: Even if you are willing to pay $350 for the Starry Station, you still need a modem to take your ISP’s broadband cable and turn it into an Ethernet cable that goes into the back of Starry. Most modems/routers cost half the price of Starry, so beyond a cool touch screen and some extra troubleshooting options, what does Starry do for you?

The answer to that question is really answered by the company’s other product, Starry Internet. That product is starting beta testing in Boston this summer; it’s the more ambitious and difficult part of the company’s master plan. It’s a form of broadband Internet that isn’t brought via cable, but beamed and received via modules using part of the radio spectrum (30GHz+) that has almost zero traffic. You could almost think of it like a network of cell phone towers on rooftops that broadcast data to little modules that sit outside your window like a satellite dish, collecting information and bringing it into your home. So someday, a Starry Beam on top of a building could shoot internet to a Starry Point sitting outside your window, and that would connect directly to your Starry Station.

Starry was founded by Chet Kanojia, whose former live-TV-over-the-internet company Aereo irked the broadcast networks so much that the resulting lawsuit went all the way to the Supreme Court. Aereo and Kanojia lost, but Starry might be considered part of a new insurgency, aimed at improving the user experience by building something mostly outside of the usual system.

When you see how a Starry Internet network could connect to your Starry Station, get rid of the cable and the rented modem/router, and deliver what the company promises to be “faster-than-broadband Internet,” it makes sense. Right now, Starry Station feels like a super nice router — nothing more. Yet.

Click the above audio player to hear our interview with Starry founder Chet Kanojia.

An expensive real-estate seminar isn’t how to get rich