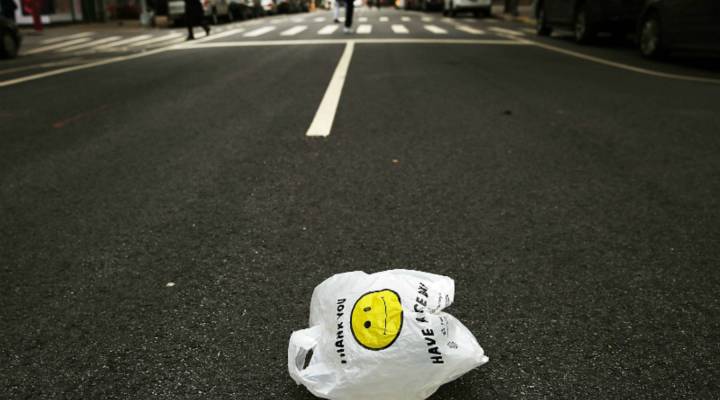 Nobody likes a hassle, least of all New Yorkers.

Yet New York City has joined cities like Washington, D.C., and Buenos Aires in imposing a fee on paper and plastic bags. They will be 5 cents apiece in New York City starting in October.

“Five cents to take a plastic bag out of a grocery store?” asked Adolph Teams incredulously.

Think of the poor!

Think of the dog poop!

Think of … the inconvenience!

All complaints heard on the streets of New York or in the halls of its city council, where the vote was unusually contested, finally passing 28-20.  Mayor Bill de Blasio is on board with the fee, which is designed to reduce pollution, waste and damage to recycling machines, which get gummed up by plastic bags.

But the hassle is the point, said Councilman Brad Lander, who was one of the bill’s sponsors.

“The policy works because the idea of paying 5 cents for these bags that used to be free is really irritating,” he said.

The revenue from the bag fee doesn’t go to the New York City government, which recorded the bill as revenue neutral. Rather, the fees go to the bodegas and grocers that supply the bags.Nine billion disposable bags are used in the city each year, according to government estimates.

One place that’s been through this before is Washington, D.C., back in 2009. Tom Sherwood, a longtime correspondent for D.C.’s NBC4, said it’s fairly intimate as legislation goes. “You’re talking about somebody’s personal behavior.”

“We didn’t get seat belt laws in Virginia until the federal government threatened to withhold federal highway funding,” Sherwood said. “People don’t like to be told what to do.”

But, he said, bag fees worked. By some surveys, usage fell by 60 percent.

“There has been a demonstrable reduction in the use of plastic bags in the nation’s capital,” he said. “When I get into line in Maryland or Virginia [where there are no statewide bag fees] I’m stunned to see the plastic bags everywhere; you forget how many there are.”