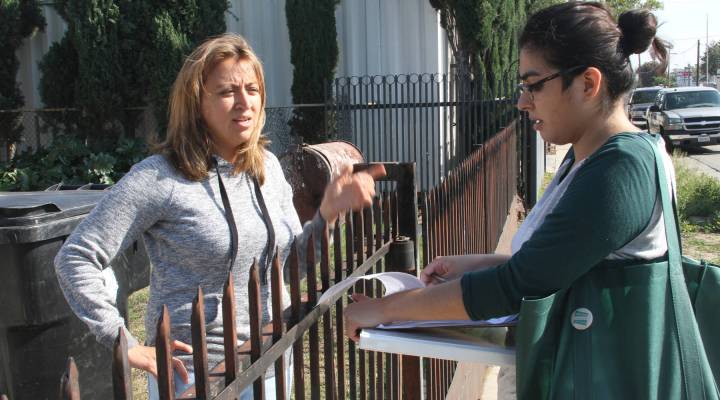 Amelia Vallejo’s son Michael is 5 years old. He is developmentally delayed, mostly deaf, has vision problems and a host of other physical ailments his mother attributes to the high concentrations of lead that had been in her yard’s soil.

“This Exide battery plant has ruined my family for the rest of their lives, with my son being disabled,” Vallejo said, looking at the new sod recently installed in her yard by state employees. “I think it’s great, but the damage has been done.”

Amelia Vallejo and her son Michael live in a house that recently had its soil replaced. Lead had been found at levels of 1,500 parts per million.

Terry Cano is 43 years old. She was born and raised in Boyle Heights. She has had strokes, suffers from severe asthma and been diagnosed with an autoimmune disease. Her brother Joe has terminal cancer. She keeps her house immaculate for fear that lead will make it inside.

“Anytime I see dust on the floor, I worry. Anytime my son wants to go outside, I worry. It’s constantly worrying and wondering when the cancer is going to set in,” Cano said.

Vallejo and Cano represent the concerns held by many in the neighborhoods surrounding the former Exide Technologies battery recycling plant. The plant has been linked to widespread lead contamination that may have affected as many as 10,000 homes in East Los Angeles. The two homeowners also share criticisms of the state agency they say allowed the plant to operate unsafely for decades on an outdated permit.

“I was very disappointed — I’m still am — with California letting Exide operate with temporary permits for so long,” Vallejo said. “That they really didn’t know, or they didn’t care, how we were getting affected by that.”

Cano said she is frustrated by the lack of information she has gotten from the state.

“We did not get the answers that we felt were owed to us by the Department of Toxic Substances Control,” Cano said. “It took them so long to do so little that I no longer trust them.”

That lack of trust could cause difficulties for the department as it works to clean the lead contamination. In order to do its work, it must first gain permission from residents to test their soil. The effort will require tremendous buy-in from residents, many of whom feel betrayed.

“One of the real problems in this is that communities really have no reason to trust government if they haven’t done a good job of being a custodian or steward of the industry prior to this,” said Lisa Schweitzer, a professor of public policy at the University of Southern California.

Terry Cano, a homeowner in Boyle Heights, is waiting for her yard to be cleaned by the California Department of Toxic Substances Control.

Schweitzer said claims of environmental racism by many residents have merit when considering the extraordinary efforts they have had to make in order to engage officials and push for the closure of the Exide plant.

“Adding to them the idea that all of their leisure time should be spent trying to get somebody to check their water for poison — it’s ridiculous,” Schweitzer said. “That’s why we have civil society, and that’s why we have government institution is that we should have ubiquitously safe levels everywhere.”

Exide officials did not respond to requests for comment.

State regulators said they are committed to improving relations with community members.

“So, this investment in sampling and cleanup is a huge and unprecedented investment in an environmental justice community in the state of California,” said Ana Mascarenas, assistant director of environmental justice for the Department of Toxic Substances Control. “The department really plans to listen, engage and move forward, and really demonstrate that commitment.”

Mascarenas said a recent allocation of $176.6 million from the state will cover the cost of all testing and cleanup of about 2,500 of the most contaminated yards.The department is planning to begin a job training program in coming months for community members to be employed in cleanup. It also plans to establish a local office to improve and coordinate information sharing efforts.

The agency also plans to work with local community groups for outreach in signing up residents for testing. One group, East Yard Communities for Environmental Justice, recently received a contract to continue sign up efforts in East Los Angeles. The group’s director said recent administrative changes at the agency have improved relations.

“I would say it’s significantly improved,” said Mark Lopez, executive director of East Yard Communities for Environmental Justice. “There’s still tons of room for growth. There’s definitely still mistakes that happen, but I think they view us as partners now, and that has happened with the change in directors.”

The department would not admit to past failings in governance, but stressed that any such failings are unlikely going forward.

“There’s been a very clear commitment to not letting something like this happen again,” Mascarenas said.

Even so, some perceived missteps have occurred since the administrative change. Community members recently fought a proposal to speed the cleanup by exempting it from major environmental protections.

“The very reason that this contamination was allowed to occur is because the state took many shortcuts and did not enforce existing laws,” said Gladys Limon, an attorney with Communities for a Better Environment. “So the community is not willing to waive environmental protections in order to get the monies to clean up the contamination that, again, in large part resulted from the state’s reckless neglect in protecting its communities and enforcing these laws.”

The proposal, which was tied to the $176.6 million funding request, was eventually discarded.

The necessity of the cleanup may overcome lingering misgivings. Amelia Vallejo said despite her disappointment with how it has handled Exide and the resulting contamination, she advises her neighbors to cooperate with the department.

“They have to clean all our yards, because if they clean mine, and they don’t clean my neighbors’, I’m going to get contaminated all over again,” she said. “I tell them, ‘You need to make sure. Let the people come in; let the people do their work. They know what they’re doing. They’re cleaning it up for us, so our kids can play in the yard.’” 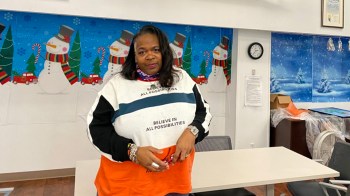