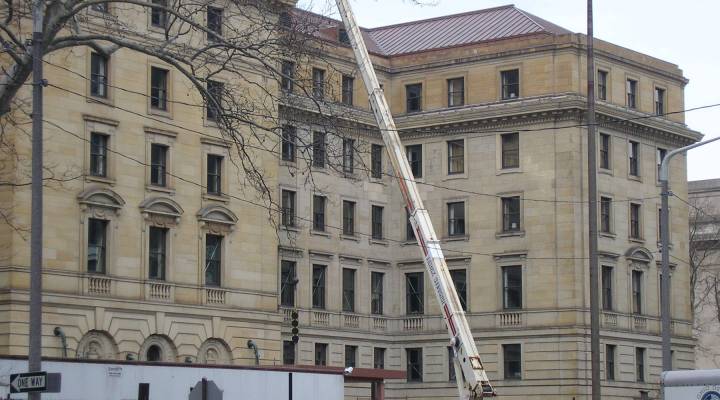 COPY
Downtown Cleveland is getting a face-lift for the Republican National Convention. Nancy Marshall-Genzer

Downtown Cleveland is getting a face-lift for the Republican National Convention. Nancy Marshall-Genzer
Listen Now

Downtown Cleveland is one big construction site right now, as the city gets spruced up for the Republican convention.  Stroll through the central business district and you’ll see new hotels being built and office buildings getting face-lifts.  It’s loud.

But head over to the northeast side of town — the inner city — and you hear sirens instead of jackhammers.

This is Jeff Johnson’s turf.  He’s a Cleveland city councilman representing Ward 10, on the northeast side.

In Johnson’s ward office, there’s a big meeting room where he’s held a number of question-and-answer sessions for constituents about the convention.

He supports it, by the way, and voted for some preliminary convention funding. Still, he and his constituents aren’t sure what’s in it for them. They ask him:

“Are we going to be losing our police officers that patrol our neighborhoods because they’re going to be dealing with issues associated with the convention?” he said.

Johnson said officers in his ward already have plenty of issues to deal with. He said a third of his constituents live below the poverty line. There’s gun violence. And the neighborhood is still struggling with foreclosures from the housing crisis.

“And as you drive through it, you’ll see some abandoned buildings right next to a full-blown working business,” he said.

Johnson heads down a main corridor in northeast Cleveland to Angela’s Family Restaurant.

He drives by abandoned houses and a fire engine roars past. There are lots of fires in those abandoned buildings.

In the diner, Bill and Hazel Dale are sitting at a table. They say they’re afraid their neighborhood will be isolated during the convention.

“Everybody gonna be downtown — not coming to the inner city,” Bill Dale said.

“And then, too, it’s amazing how they could find so much money to put into downtown, and it’s like, oh my goodness,” said Hazel Dale. “If you can find money for down there, then you need to find money for the neighborhoods.”

Councilman Jeff Johnson voted for preliminary convention funding, but he and his constituents aren’t sure what’s in it for them.

Johnson is trying to steer some of the convention spoils to his neighborhoods.

Later, at a city council meeting with Republican National Committee representatives, he tries to get his local vendors on the list of businesses selling supplies to convention organizers.

“And I just want to reiterate the subject of supplier diversity,” he told the Republican officials. “The need for this city’s citizens to somehow have a benefit.”

“We use union labor,” replied Jeff Larson, the CEO for the 2016 Republican national convention.

He said they’re working on diversity with the local host committee. The committee says it’s reaching out to minority-owned businesses. It’s hired Cleveland State University to do a study on the economic impact of the convention.

Abandoned buildings are a common sight in northeast Cleveland.

“Our overall tax base will be a little bit higher due to this event,” said Iryna Lendel, interim director of the university’s Center for Economic Development.

She said the city will collect more in sales and room taxes during the convention.

“And the larger budget will allow larger investments in more disadvantaged areas, as well,” she added.

City Councilman Jeff Johnson said his neighborhoods will get some of that tax money. It’ll go into the city’s general fund. But Johnson estimates Cleveland will only get about a quarter of the money spent at the convention. The rest, he said, will go to the private sector — mostly the downtown businesses that are getting spruced up. 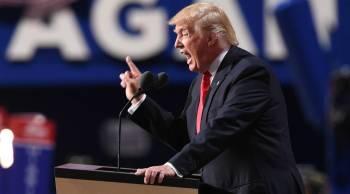 The economy according to Donald Trump