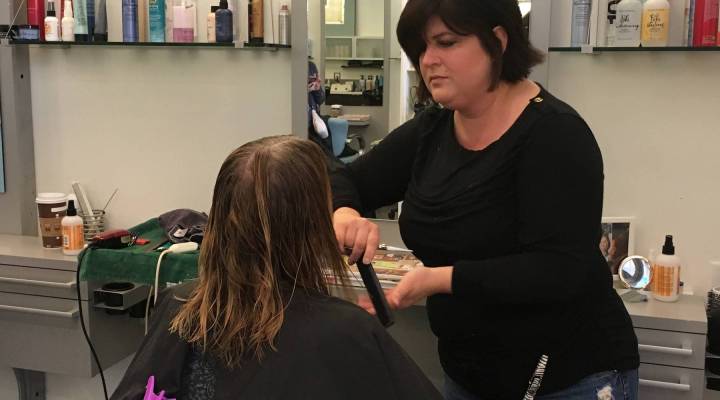 As heroin and opioid addictions continue to spread among middle-class communities, families who never thought they’d face this problem are finding out one simple truth — treating someone for an addiction can be really, really costly. And some are turning to the time-honored method of the community fundraiser.

One recent Sunday afternoon, Melissa Hume staged a benefit at her hair salon, Utopia, in Waterford, Connecticut. She offered $25 haircuts, with the proceeds going to help families pay for inpatient rehab for drug addiction — an event she called Hair for Healing. As the day started, she kept her expectations low.

“Actually, I hadn’t thought about a goal,” she said.”I just put it out there to be busy all day. We started at noon, and we’ve had every chair full so far.”

Utopia, in Waterford, Connecticut, raised $1,600 at its Hair for Healing event.

Hume lost her cousin, Christopher Johns, to a heroin overdose about 18 months ago. She said she wasn’t sure what her comfortable community would make of fundraising for heroin addicts, but so far, so good.

Christopher Johns’ mother, Lisa, put her son through several rounds of rehab during his years of addiction. “He begged for help,” she said. “He begged me to find him something. He didn’t want to be an addict. He hated himself.”

But she said the sheer cost was a huge obstacle for her family.

After Lisa Johns lost her son, she founded the nonprofit Community Speaks Out. It works to reduce the stigma surrounding addiction and helps families pay for and navigate recovery. Her partner in the enterprise is Tammy de la Cruz; her son is currently in recovery. She said some families can rely on insurance coverage, while others will have their claims denied outright or find payment is limited to just a few weeks.

Tammy de la Cruz (right) speaking to a Community Speaks Out volunteer. De la Cruz believes addiction should be treated just like any other chronic disease.

“And so we’re talking, people are remortgaging their house, taking out loans against their retirement,” de la Cruz said. “And the insurance is determining whether a person is sick enough or not. Twenty-eight days is not enough for a person that’s doing heroin. It’s just not enough.”

De la Cruz believes addiction should be treated just like any other chronic disease, but she said so far, that’s not the case.