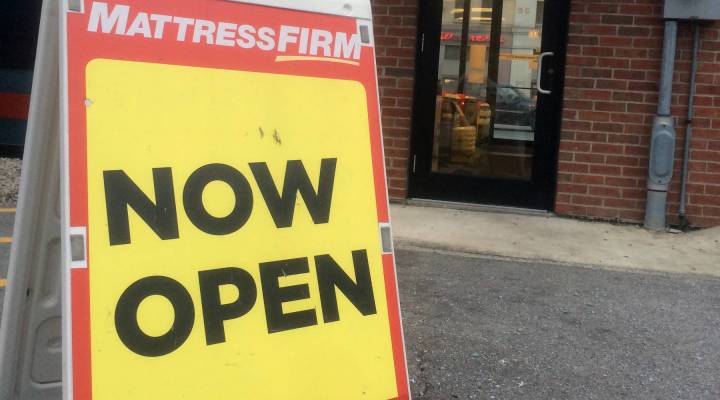 COPY
A recently opened Mattress Firm in Chicago's South Loop. After a wave of acquisitions, Mattress Firm now has 3,500 stores in 48 states and controls one-third of the market. Derek L. John/Marketplace

A recently opened Mattress Firm in Chicago's South Loop. After a wave of acquisitions, Mattress Firm now has 3,500 stores in 48 states and controls one-third of the market. Derek L. John/Marketplace
Listen Now

Amy Arens-Terpstra is a social researcher who lives in Chicago. Last year she started losing sleep over a sudden change she observed in the retail landscape. On her daily commute through the South Loop, she began noticing lots and lots of mattress stores — two stores just down the street from each other were from the same company.

“At my last count there were five mattress stores either on or right off Roosevelt Road between State and Halsted Street,” she said.

On the city’s North Side there’s a shopping strip with 10 mattress stores in less than a mile. Retail clustering is nothing new, but unlike a burger and fries, a mattress is not exactly an impulse buy.

“Honestly, I have bought one mattress in my adult life, and I cannot conceive how a city can sustain so many mattress stores,” Arens-Terpstra said.

And it’s not just Chicago. In the past decade the number of stand-alone specialty mattress stores has jumped from 7,000 to nearly 10,000 stores nationwide.

According to Dave Perry, bedding editor for the trade magazine Furniture Today, the majority of mattress purchases were once made inside department stores and mom-and-pop furniture outlets. Today, the specialty mattress chains have more than 50 percent of the market, compared to just 19 percent in 1993.

“It is a hotbed of activity,” Perry said. “Literally, of course, we hope it’s somewhat of a cool bed, since they say a cool bed actually promotes a better night’s sleep. So how about, it’s a cool bed of activity?”

Perry, analysts and other industry-watchers list a few reasons for the ongoing trend. There’s an ongoing awareness of the health benefits of a good night’s sleep. That’s led to shorter purchase cycles for new mattresses, once every 10 – 15 years (Mattress Firm’s slogan is “Replace every 8”). Baby boomers are upgrading to fancier and more expensive mattresses. The housing market’s rebounding, and there’s pent-up demand following the recession. And, despite some online startups, so far, mattress shopping is largely internet-proof.

“The only way you can really test the comfort of the mattress is to lie down on it,” Perry said. “So I think the brick-and-mortar stores have a very big advantage.”

That, he added, is why a single store can get by on just a few customers a day. Plus, each store — complete with a big, bright sign — doubles as advertising.

Since 2007, Houston-based Mattress Firm has been on a national buying binge, taking over 17 mattress retailers, including Bedding Experts and Back to Bed. Its acquisition of major competitor Sleepy’s, completed in early 2016, brings its total store count to nearly 3,500 in 48 states — almost one-third of the market. That nearly doubles Mattress Firm’s footprint in Chicago to 237 stores.

“When that consumer says, ‘I’m fed up, I can’t sleep on this bed any longer,’ we want them to think, ‘hey, there’s a Mattress Firm right over there,’” Woods said.

Of course, as we’ve seen, there are sometimes two — or even three — Mattress Firms “right over there.”

Which begs the question, how long will the mattress boom last?

Mattress Firms’ Sam Woods isn’t sure, but he’s bullish on the trend continuing, saying “we have yet to hit peak mattress.”

He pointed to an example when his company took over a competitor’s store in close proximity to an existing Mattress Firm, and he assumed they would close the weakest location.

“Well, what happens is that often those two stores will both improve their performance,” he said. “So, we’re like, ‘maybe we’ll keep them both open.’”

A 2015 industry report from IBISWorld projects the U.S. market will add another 700 mattress stores over the next five years.

That same report notes that the number of units sold peaked a few years ago. But because of an increase in premium mattress sales, the industry’s total revenue has never been higher.

In Chicago, the once skeptical Amy Terpstra now seems poised to join the club.

“I think I might need a new mattress,” she said.