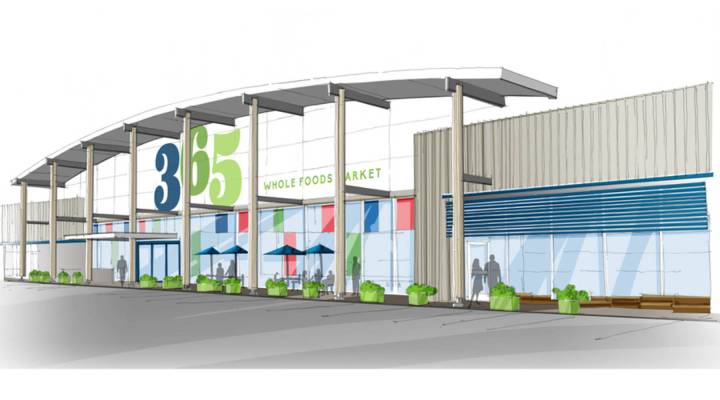 COPY
A sketch of what the Silver Lake location will look like. Courtesy of 365 by Whole Foods

A sketch of what the Silver Lake location will look like. Courtesy of 365 by Whole Foods
Listen Now

Whole Foods is opening its first lower-priced chain, 365 by Whole Foods Market, in the hip Los Angeles neighborhood, Silver Lake, in late May.

The higher-ups at Whole Foods believe they generally know the kind of person who shops there.

“I think it’ll be diverse,” said Jeff Turnas, president of the new concept. “But I think the real exciting thing is those who don’t shop at Whole Foods or haven’t shopped with Whole Foods.”

Phil Lempert, editor of supermarketguru.com, said he doesn’t see how Whole Foods is going to find those new shoppers. After all, the new store is talking over an old Kroger supermarket in a strip mall.

“Frankly, it looks like a 1950s Pantry Pride or Safeway store,” he said. “So, I don’t know, once we get in the store whether it’s warm, curated. That’s really going to dictate whether millennials are going to shop there.”

Once inside, customers will be greeted by a lot of the store’s namesake proprietary brand, 365, which costs less than some of the fancier things you find at Whole Foods.

Whole Foods also runs its own restaurants and coffee bars in its stores, but this store is partnering with a restaurant in New York and an independent coffee company to run the coffee bar.

“Why have they decided not to do that?” Lempert asked. “The answer that comes to mind is that these other brands are stronger with millennials than either Whole Foods or 365.”

Investors are hoping this new concept can turn things around. Whole Foods stock got crushed after several quarters of sluggish sales. This year it’s been down as much as 40 percent over 2015.