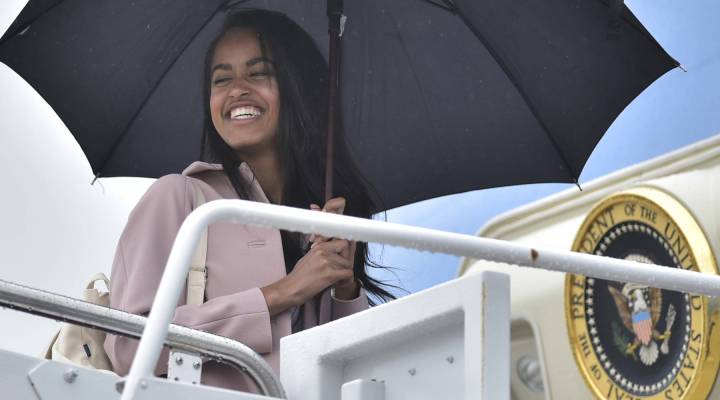 Malia Obama’s plans to take a “gap year” before starting at Harvard in the fall of 2017 has given a boost to a growing industry that caters to students who want to take a year off between high school and college. The news arrived just as the American Gap Association — yes, there is such a thing — kicked off its second-annual gap year conference in Boston.

“It was pretty interesting timing, actually,” said board member Karl Haigler. “There was quite a lot of encouragement.”

Though there are no official numbers, Haigler estimates each year between 30,000 and 40,000 students take time off from school. That’s a tiny fraction of college students, but he said the number has grown along with the intense pressure on kids to achieve.

“A lot of students are expressing the need to take a break before they go on to four years of college, and really begin to get a better sense of who they are and what they want to do with their lives,” he said.

Dozens of programs have cropped up to help them through outdoor adventure, community service or international travel. The American Gap Association accredits around 15 programs, Haigler said, with about 20 more seeking accreditation.

One of those programs is Carpe Diem Education, which offers structured experiences in places like Latin America, Southeast Asia and Africa.

“Whether you’re backpacking to Machu Picchu, whether you’re doing some sort of volunteer work, you’re going to have mentors that are there to help facilitate that process of reflection,” said director Drew Edwards. “It’s not just, ‘Hey, I’m doing this cool thing, but what does this actually mean? How does this apply to me? And where is this going to fit into my life as a whole?’”

All that self-discovery doesn’t come cheap. An eight-month program runs about $19,000, though there are scholarships for low-income students.

“The very high-touch, hands-on, highly expensive model is, frankly, just out of reach for most students,” said Willy Oppenheim, founder of Omprakash EdGE, a nonprofit program that connects students with international volunteering and internship experiences.

Oppenheim started Omprakash during his own gap year in 2004, after struggling to find a way to teach internationally without going through an expensive, chaperoned program. The base tuition for his program is $750, plus travel and housing costs.

@Marketplace No. A gap year is a luxury I didn't have available. I either had to be in college or self supporting by the time I turned 18.

The University of North Carolina at Chapel Hill started a Global Gap Year Fellowship to make the gap year experience more accessible. Around 40 students a year, or about 1 percent of the entering class, take time off first, said admissions director Steve Farmer.

“Most of them haven’t involved a program,” he said. “They’ve just involved students doing something that they thought was worthwhile.”

Those students typically do better when they do start school. A study at UNC and Middlebury College found that students who took gap years had higher GPAs than their high school performance would have predicted.