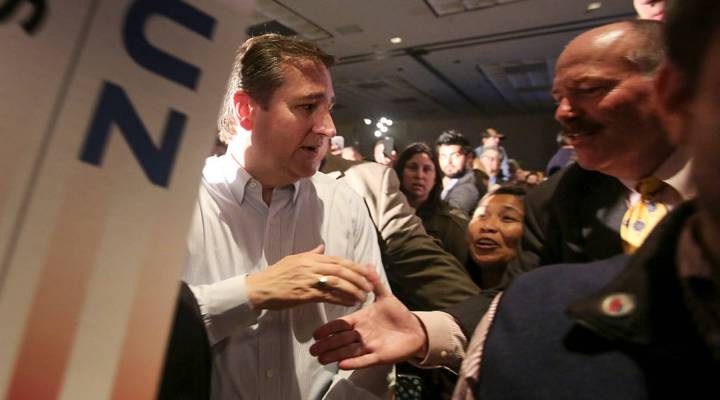 COPY
US Republican presidential candidate Ted Cruz greets supporters during a rally at the Town and Country Resort and Convention Center on April 11, 2016 in San Diego, California. BILL WECHTER/AFP/Getty Images

To the many unexpected things in this presidential campaign cycle, add California.

“This is the first time a California presidential primary will make a definitive difference since the 1972 Democratic primary,” said Dan Schnur, director of the Jesse Unruh Institute of Politics at USC.

Usually, by now, the winners of the national primaries are pretty much figured out and they can just snooze through California’s June primary. But on the Republican side especially, things aren’t quite figured out. That means the state’s 172 GOP delegates have suddenly become very important.

One problem: campaigning in California is very expensive. “It costs upwards of 1 million dollars a week in order to have a significant advertising buy in the state of California,” Schnur said.

Trump gets a lot of airtime for free. But neither Ted Cruz nor John Kasich had budgeted for a California primary because there was really no way to anticipate the primary season would last this long, said Schnur.

It also turns out the newly important California primary is having a domino effect, raising campaign costs all the way down the ballot in the state. “Because turnout will be high,” said Erica Walters, a partner at California-based campaign consulting firm Terris, Barnes & Walters. When turn out is higher, campaigns have to spend more on direct mail and other targeted, non-TV outreach. “I have candidates that are easily gonna be spending 20 more,” Walters said. “It’s a scramble cause not everyone saw this coming..six months ago.”