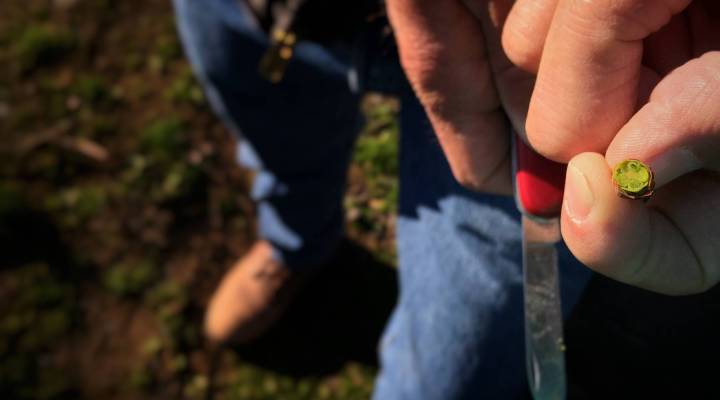 In Northwest farm country it’s pretty warm right now — in fact record temps for spring. And that means tiny blueberry buds are plumping up early. But cold snaps at night could kill them until early June. In Washington state, blueberries should yield about a $100-million-dollar harvest this year. To save more of those money-bearing buds, blueberry farmers wage epic battles against biting cold frost at night.

At Olsen Brothers Ranches in Prosser, Washington, the battle starts with a retro-looking frost alarm, like a radio from the 1940s. It sends workers scrambling from their beds at night when temperatures drop too low. They put boots on, and head up and out to save tender fruit buds.

For farm supervisor Arnulfo Munoz,  the alarm is a bit tough on his marriage. His wife is not a fan.

“Every time she feel the cold outside she says, ‘Oh, the alarm again? Are you going to sleep, or going to let me sleep?’” he said.

Farm supervisor Arnulfo Munoz says the frost alarm wakes him up at all hours.

With the alarm buzz, a skeleton crew of farmworkers rattles out with the first alarms to drive around the pitch-black fields. Keith Oliver oversees hundreds of acres of valuable fruit here at Olsen Brothers.

Here’s the battle plan. Workers find the coldest spots, then scramble to start irrigation sprinklers. It sounds weird, but spraying water takes a bite out of the cold. They hiss and spit air as they start up. Then, giant wind machines turnover to life. And workers light up hundreds of propane heaters.

Timing this cold war each night is key. Wake workers up and start burning lots of fuel too soon?

Thousands of dollars per hour.

Start the fight too late? Even one night — major crop fail.

Which is why at Washington State University’s agriculture research station in Prosser, scientist Gwen Hoheisel is spending a lot of time deliberately freezing down hundreds of blueberry buds. She wants to know exactly when they die. She uses a razor blade to snap through the plump nuggets.

“So see how there are little circles of darker green,” Hoheisel said.

She takes a razor and slices a bud open. Inside are bitty orbs of green, almost half the size of a pinhead, little tiny circles of green inside the bud part. Hoheisel is looking for signs that the frost won the fight.

“When they’re dead [from cold], they are little pinheads of brown,” she said.

The moment those tiny bits of green die, is a really complex thing to predict. You have to account for sunny days, cold nights, and how much rain, wind and cloud cover there is. It’s a guessing game now. But Hoheisel is recording thousands of different scenarios into her computer model to help farmers. She thinks it’s going take 10 years to realize a good tool.

Back amid the blueberries at Olsen Brothers Ranches, this is Oliver’s 31st spring battling frost on this same fertile ground. His blue eyes are mostly blood-shot. Determined.

“We go for it,” Oliver said. “We don’t want to give up on the year in the spring. We’re gonna fight the frost.”

In June, frost retreats. Then, farmworkers get ready for harvest … and sweltering 100-degree desert temps.