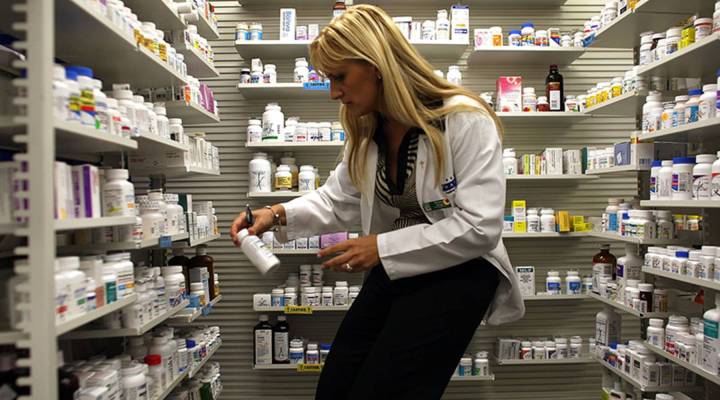 COPY
Big Pharma doesn't like the patent review board. But organizations that want to lower prescription prices for consumers love it, and they're being joined in their fight by people who aren't usually seen as champions of consumer rights — hedge fund managers. Photo by Joe Raedle/Getty Images

Big Pharma doesn't like the patent review board. But organizations that want to lower prescription prices for consumers love it, and they're being joined in their fight by people who aren't usually seen as champions of consumer rights — hedge fund managers. Photo by Joe Raedle/Getty Images
Listen Now

Some of our favorite stories here at Marketplace are those involving strange bedfellows. We can thank the Supreme Court for shedding light on today’s example.

The court heard oral arguments in a case involving patents, including drug patents. It used to be that to challenge one, you’d have to actually go to court. That was a slow, expensive business, so Congress created a fast track: a patent review board.

Which bring us to our strange bedfellows.

Big Pharma doesn’t like the review board. But organizations that want to bring down the price of prescription drugs for consumers love it, and they’re being joined in their fight by people who aren’t usually seen as champions of consumer rights — hedge fund managers.

Let’s be clear; hedge funds are in this for the money. Their strategy is to challenge what they consider vulnerable, or cosmetic patents. And then bet that the drug company’s shares will drop. In one case, traders challenged a manufacturer who wanted to extend a patent by introducing a rubber stopper — which had nothing to do with the underlying medicine.

This strategy is perfectly legal. Sherkow said by his count, hedge funds have brought three dozen challenges. He said none of these cases have yet to help consumers, for example, by bringing generics to market.

“We think it’s a cynical ploy by those who contribute nothing to innovation to drape their efforts to make money in a cloak of concern for patients,” said Tom DiLenge, general counsel for the trade group Biotechnology Innovation Organization.

It’s the federal government’s responsibility to keep the pharmaceutical business competitive. But citing the rubber stopper patent as an example, pro-competition folks believe regulators have fallen down on the job.

So here we are; hedge funds can theoretically make big money by challenging patents.

In an unexpected twist, University of Chicago finance professor Luigi Zingales said traders have a financial incentive to break up monopolies.

“Because everybody else who is an expert on patents, or expert of drugs, in one way or another benefits from the system and so is not willing to challenge it,” he said.

Zingales said if these Wall Street traders can do some good by doing well for themselves, it’s better than what we’ve got now.