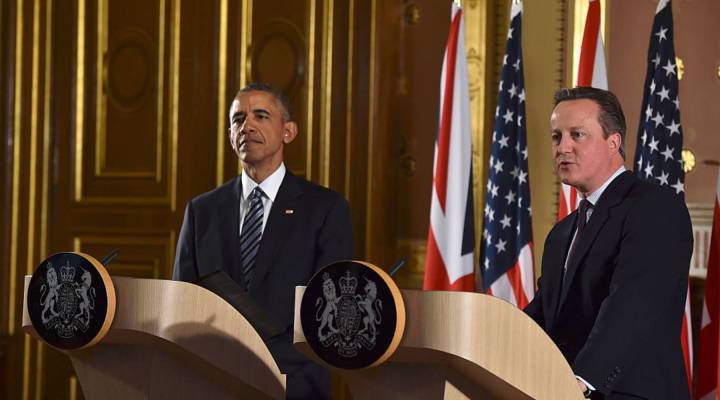 President Barack Obama encouraged Britons to stay in the European Union when they vote in the country’s June referendum. He touted a “together-is-better” message in an op-ed in the Telegraph newspaper and a press conference with Prime Minister David Cameron on Friday.

He also said the U.K. would be at the back of the queue for a trade agreement with the U.S. on its own, but he’s very interested in wrapping up a pending deal with the whole European Union.

In response, London Mayor Boris Johnson, a leader of the campaign to leave the EU, accused Obama of being a hypocrite, among other jabs.

Jeremy Shapiro, with the European Council on Foreign Relations, said Obama is speaking out forcefully because both politically and economically, the U.S. is better off with the U.K. in the EU.

Moreover, the prospect of a British exit from the EU is the greatest threat to financial stability in Europe today, said Erik Jones, professor of European studies and international political economy at Johns Hopkins School of Advanced International Studies.

“Every serious projection of what’s going to happen if Britain leaves the European Union expects a recession, at least at first, and then slower than expected growth thereafter,” said Sebastian Mallaby, senior fellow at the Council on Foreign Relations. He said that could impact British demand for American exports.

“Right now, many American and indeed many global firms have operations in the U.K., using it as a platform to serve the entire EU market,” said Jacob Kierkegaard, senior fellow at the Peterson Institute for International Economics. “But once the U.K. leaves, then that, in all probability, will be not so easy to do, and there will a whole host of trading restrictions.”