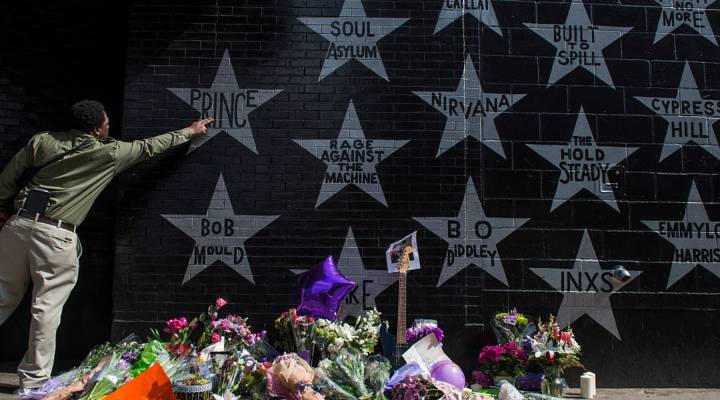 A man touches the Prince star on the wall outside the First Avenue nightclub Thursday in Minneapoli. Prince died earlier today at his Paisley Park compound at the age of 57. Stephen Maturen/Getty Images

A man touches the Prince star on the wall outside the First Avenue nightclub Thursday in Minneapoli. Prince died earlier today at his Paisley Park compound at the age of 57. Stephen Maturen/Getty Images

The whole city is mourning Prince, the native pop superstar who was found dead at his estate and studio, Paisley Park, Thursday morning.

Instead of fleeing for the coast like another Minnesota native, Prince pioneered the Minneapolis sound and pulled music into the city’s orbit. He set up shop at Paisley Park in Chanhassen, a sleepy suburb, where he summoned protegees and churned out albums. After his sudden death, mourners flocked to pay their respects, even in the pouring rain. First Avenue, the club where Prince filmed “Purple Rain,” is holding a free dance party that, with the city’s permission, will run all night. The Current, a local public radio station that shares a parent company with Marketplace, is playing Prince all day. Minneapolis City Hall’s bell tower will play Prince songs on Sunday.

To learn more about Minneapolis and its relationship with the Purple One, we called Andrea Swensson, a host and local music writer at the Current. She knew Prince professionally and was one of the first reporters on the scene at Paisley Park Thursday morning. This conversation has been lightly edited for clarity and condensed.

What was your relationship with Prince?

I’ve always been a Prince fan. I can remember listening to his music from when I was a kid. I tried to come to Paisley Park when I was in high school, but I didn’t have any money so I couldn’t get in. I stood in line and then got turned away at the door after seeing him at an arena show here. Then recently I developed kind of a funny relationship with him as a journalist. Our first contact was a few years ago. He was playing these little rehearsal shows at the Dakota Jazz Club here. They didn’t allow cameras or cell phones, which is very typical for Prince. So I brought a notebook and I sketched a picture of him playing, so that I could help to set the scene with my review. It was honestly just a doodle — I’m not an artist by any means — but I put it up on the blog and the next day I got a call from his people that he wanted to have my picture. I said “I’ll give you a scan of it, but I want to keep the original.” And then the next night I came back to the Dakota, and they set aside VIP passes for me to enjoy the show. I actually stood next to Bobby Z, the drummer for the Revolution. It was so surreal and amazing.

Andrea Swensson’s sketch from a small Prince show in Minneapolis.

I don’t even know how to properly summarize it. Every experience that I’ve had with him was simultaneously so surreal and so normal. We like to talk about him like he’s this mystical creature, but in reality he’s just kind of a very shy, sweet, down-to-earth kind of guy. He’s funny, he would joke and give me a hard time.

Someone who’s not from Minnesota might not realize this, but he’s so much more than a hometown hero, right?

Oh yeah, he’s larger than life. It’s like a shadow that looms over everything else that’s ever happened here. I like to joke that people think Prince owned First Avenue in the ’80s because he was so huge, he called it his home base. And he did metaphorically own it, I guess, putting it in his movie, recording “Purple Rain,” the album, there and everything. He absolutely had control of what was going on in Minneapolis for several years.

And even now, when you get an invite out to Chanhassen, you just drop everything, right? What was that like?

Yeah, I think I tweeted, “The Summoning.” I had no idea what I was in for. I didn’t know if I was in trouble. It was kind of like being called to the principal’s office. I had just published some coverage of the “Purple Rain” 30th anniversary, so this was two years ago. He had seen an interview I did with Bobby Z, and he summoned both of us out to Paisley Park to just kind of hang out. Looking back on it now, I think he just really didn’t like when people only thought about his past work, or that “Purple Rain” period, and didn’t pay attention to what he’s doing now. So he really just kind of flung the door open to his studio and said, “Here’s what I’m doing now, I only think about the future.” So he brought us in and played a bunch of music he’d been working on and kind of stared at us just to get our reactions.

Then I just wanted to keep him talking as much as could. I think I ended up chatting with him for a good hour after that. I asked him stuff I’d always wondered about his childhood, growing up and getting into music. We talked about his thoughts on ownership and copyright. He was so passionate about artists being able to maintain ownership of their work and be paid for their work. I think he was really trying to figure out what that meant now with Spotify and all these other services where people can get everything for free.

Media and supporters gather at Paisley Park on Thursday in Chanhassen, Minnesota.

It seems like during his late period, Minneapolis and the Current in particular were much more receptive to his newer work than any other national outlet.

[Prince’s people] were slipping new music to the Current, and they would debut it and kind of see what people thought. I remember the song “Screwdriver” coming out that way, and a couple others. He obviously wanted to stay rooted in his hometown, and I think he appreciated that there was a radio station that would play independent music and support artists that weren’t on major labels. I think he saw it as kind of a direct pathway to his audience.

You were at Paisley Park this morning, before his death was confirmed. What’s it feel like in Minneapolis today?

It’s just been really beautiful, honestly, to see all these fans coming out, comforting each other and crying. Putting up purple flowers, purple balloons. A lot of people are wearing Prince memorabilia — T-shirts, purple wigs, purple outfits. It’s obviously people who admire him so much, and this is such a monumental loss, so to be able to be here with these people as we’re all kind of processing together, it’s really important I think.

A young man cries at the memorial for Prince outside First Avenue nightclub Thursday in Minneapolis.

Correction: A previous version of this story misidentified the drummer for the Revolution. He is Bobby Z.