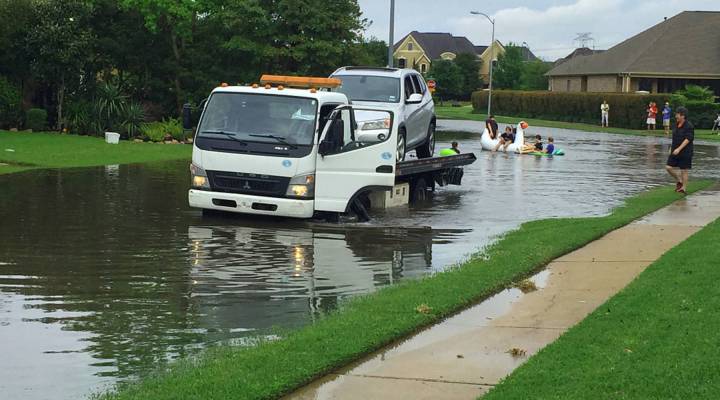 COPY
Children play in flood waters in the Kelliwood Park neighborhood of Katy, Texas. Flooding in and around Houston has killed at least five people and prompted mass rescues. Governor Greg Abbott declared a state of disaster in nine counties.   STR/AFP/Getty Images

Children play in flood waters in the Kelliwood Park neighborhood of Katy, Texas. Flooding in and around Houston has killed at least five people and prompted mass rescues. Governor Greg Abbott declared a state of disaster in nine counties.   STR/AFP/Getty Images
Listen Now

Officials in Harris County, Texas, said that 240 billion gallons of rain have fallen in the greater Houston area the past couple of days. After the devastating Memorial Day floods in Houston last year, a professor who studies these things called Houston “the No. 1 city in America to be injured and die in a flood.

Samuel Brody is a professor of marine sciences and planning at Texas A&M University and co-author of a book called “Rising Waters The Causes and Consequences of Flooding in the United States.”

He said the flooding in Houston is an important reminder that putting people, pavement and structures in vulnerable areas can lead to disastrous consequences.

“Houston’s unique in that it’s a low-lying area barely above sea level, it’s originally made up of bayous and soils that don’t drain too well, and it’s a city that’s afflicted by flooding from both the sea, saltwater flooding and rainfall-based flooding. The problem is not the environmental conditions, the problem is pavement. The city is growing at a tremendous rate over the last 15 years, we added over 25 percent more pavement in the area, and with pavement and people and structures in environmentally vulnerable places that equates to a lot of flood damage.”

The more pavement in former wetlands areas, the more flooding. There’s even a formula.

“In the Houston area,” Brody said, “every square meter of pavement equates to about $4,000 in extra flood damage. And over the last 11 years, Houston alone has incurred over $3.5 billion in just insured losses to residences and businesses.”

“It’s all about protection, not about recovery. We know elevating structures above the 100 year level of inundation is saving on average about a million dollars per community per year in the United States. There’s no reason we can’t do that in Houston.”

“It really breaks my heart, particularly in areas that are chronically flooded over time.”