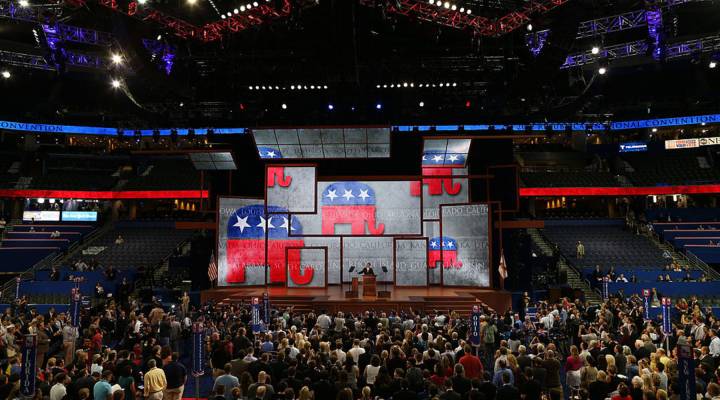 The Republican National Convention in Cleveland is only a few months away, but some major companies still haven’t committed to sponsoring the convention.

In some cases, those companies are worried about being associated with an event that could be divisive, or even spark violent protests.

But city boosters brush aside any talk of dissension or controversy.

Boosters like David Gilbert, the CEO of the host committee for the Republican National Convention.

His committee is responsible for raising $57 million in cash. It’s also seeking in-kind donations.  He said they still have to raise $8 million in cash, but he doesn’t know of any corporate donors who’ve backed out of their commitments, although some are hesitating to support the July event.

“They’ve said they want to see how it plays out,” Gilbert said. “It hasn’t been relayed to me that it is one specific concern about politics or safety or anything like that.”

David Gilbert is CEO of the host committee for the Republican National Convention.

Some strategists say corporations are worried about being associated with protests, or controversy if there’s an open convention.

“Well, I think anyone who does brand management is concerned about where your brand is placed,” said Bruce Haynes, president of Purple Strategies, a brand strategy consulting firm in Virginia. He said corporations have been spooked by confrontations at some of Donald Trump’s campaign events.

“People have looked at some of the Trump rallies,” he said. “They’ve felt like ‘Wow, is that something – is that what’s going to happen in Cleveland? Is that something I want to be involved with?’”

Haynes said corporations will wait longer than they normally would to make a convention contribution, and that could spill over to the Democratic convention, because most companies want to appear bipartisan and balanced politically.  So, concerns about one convention could have a “chilling” effect on the other.

Back in Cleveland, David Gilbert insists only a few companies are still dithering about donations.

“And you and count on a couple of fingers people who’ve said we want a little more time, and see how this plays out,” he said.

But there are some big names among the holdouts.  A Walmart spokesman told me in an email that it hasn’t made a decision about its presence or participation.  Coke has given $75,000 to the Republican convention.  But it’s not clear if it’ll make its usual in-kind donations of soft drinks and other beverages.  Still, Gilbert and other Cleveland convention boosters are not deterred.

“No, I don’t think it’s going to affect us at all,” said Mary Farrell.  She runs a small gift shop in Cleveland called Bright Green, located a couple of streets away from the arena where the convention will be held.  She only sells locally-made products.

If there’s less Coke available, “it might even give us a better opportunity to promote our own beverages because we make all sorts of things here,” she said. “Different sodas that are made locally and Kombucha tea that’s available here in Cleveland made locally.”

Farrell runs her shop with her 84-year-old mother, Elizabeth Rauschkolb-Farrell, who’s lived in Cleveland all her life and said big companies have come and gone before.

“Higbee’s, May Company, Halle’s, Neiman Marcus – they were here – they’ve all left,” she said.

Cleveland’s downtown suffered, but now stores and people are coming back.  Rauschkolb-Farrell said, the city survived.

“Cleveland’s starting to recover, but it’s going to take time,” she said.

Rauschkolb-Farrell said the Republican convention won’t turn things around instantly for Cleveland. But her daughter Mary is really hoping for a bump in business.  She could be running the shop alone, though. Her mother, a lifelong Republican, might protest at the convention, if she doesn’t like the GOP nominee.