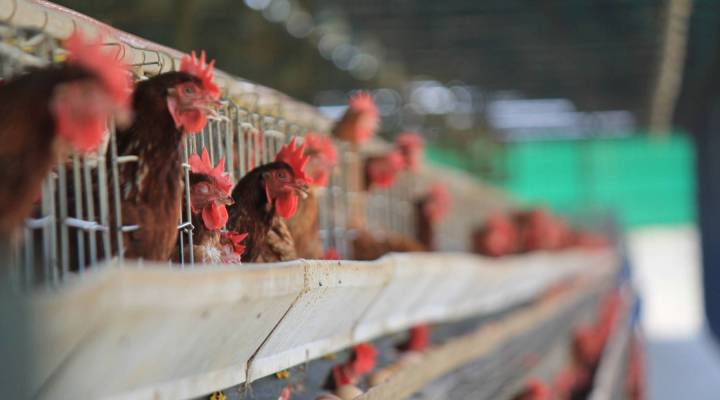 COPY
Egg-producing hens at a farm in Venezuela. Jorge Galino/Marketplace
The Resource Curse

At a time when oil prices are low and petrostates are suffering, economists and historians mention the term “resource curse.” It is a paradox: many natural resource-rich economies have under-performed, faring worse economically than non-endowed countries. How could this be?

Often oil crowds out other sectors, so when a price bust hits an undiversified economy, the impact is severe. Which brings up Venezuela, once dominated by agriculture. Before the country found oil in the early 20th century, ranches provided ample milk and meat. Coffee beans led the country in exports. People mostly worked on farms.

Today, after the Age of Oil, there are food lines and shortages.

“The Venezuelans were fed on food brought from overseas, on imports,” said rancher Giovanni Finol, former president of the livestock federation in the western state of Zulia. “For the last 15 years, the government has been destroying production.”

This represents a strain of what’s called “Dutch disease.” In the Netherlands, Nigeria, Venezuela and elsewhere, oil has pushed out other sectors, in this case dairy, cocoa beans, coffee and poultry.

Here’s how: oil exports sell on the world market for dollars, which flood the exporting country. Then, like eBay shoppers, those dollars compete to buy the local currency, bolivars. The bolivar gets bid up. In other words, it appreciates.

For years, Venezuelans with strong bolivars in their pockets bought lots of international things. Imports surged. The people benefited, and the government chose to keep the currency strong.

“In most democracies, the value of the currency is going to be overvalued, because they want to be able to import more,” said David Smilde, professor of sociology at Tulane University and senior fellow at the Washington Office on Latin America. “They want to have this level of well-being, like any democratic politician does.”

The trade-off: When people buy imports, they bypass domestic goods made at home.

“It made it very difficult for local industry to compete,” Smilde said. “You could always import things for cheaper. It slowly undermined local production.”

In Venezuela, that’s just the first hurdle. For the last decade, price controls have been in effect for food and other basic goods. The socialist government of Hugo Chavez sought to tamp down inflation. But like the U.S. experiment with price controls in the 1970s, government-controlled low prices squeezed profits and producers, creating shortages.

“For many products, the profit margin is nonexistent,” said rancher Finol. “Now we are producing where our costs are higher than the selling price.”

The country’s agriculture has shrunk from a significant slice of economic output to less than 4 percent. Today, Venezuela imports 80 percent of its food.

Still, when cattlemen in Zulia tally their issues, they almost run out of fingers. Since 2001, the government has expropriated – that is, confiscated – private acreage on grounds of land reform and redistribution. It took land from the family of dairy farmer Albert Zambrano’s wife.

“You don’t feel safe, to invest, to produce,” Zambrano said, “because tomorrow the government could come and say ‘this is ours now.’”

Not to mention the local crooks. Extortion and kidnappings and theft are on the rise, and the rule of law is disintegrating. By some measures, Caracas stands as the world’s kidnapping capital. Once, Zambrano said,  he and army officers caught red-handed a group of men stealing 70 of his cows and loading them into a cattle truck; the system released the thieves after minimal punishment.

“They sent a report to the district attorney,” Zambrano said. “And the thieves were out on the street two days from the robbery.”

Asked why he does it, the fifth-generation rancher said if he tried to sell his family land, it would be worthless.

By all accounts, Venezuela has failed to do what the famous intellectual Arturo Uslar Pietri proposed back in 1936: to plant, or “sow,” oil. That is, use petroleum money to grow new sectors, rather than push them out and inadvertently create food shortages and lines.

“When we see those lines, it’s not because we as producers do not want to supply them,” Zambrano said. “It’s just that we don’t have the conditions to do so.”

Now, the world oil price bust has brought yet another challenge: there aren’t enough petro-dollars coming in to Venezuela to use to buy imports. And the government holds dollars closely.

One egg producer said he can’t even import feed for his hens, so he’s making plans to sell them for slaughter.