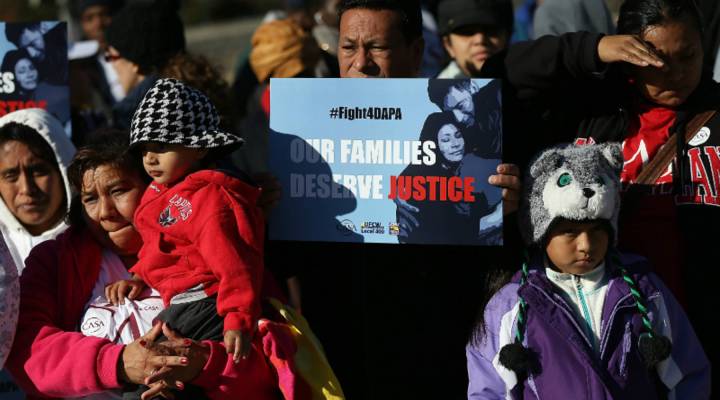 COPY
Supporters of immigration reform protest outside the U.S. Supreme Court back in November 2015. The protesters demanded the implementation of President Obama's immigration relief programs, including the Deferred Action for Parents of Americans. Win McNamee/Getty Images

Supporters of immigration reform protest outside the U.S. Supreme Court back in November 2015. The protesters demanded the implementation of President Obama's immigration relief programs, including the Deferred Action for Parents of Americans. Win McNamee/Getty Images
Listen Now

Arguments start Monday in a major immigration case before the Supreme Court. It’s about the “Deferred Action for Parents of Americans” program, which would allow people who’ve been in the U.S. more than five years and have children who are in the country legally regularize their immigration status.

Several big names in the tech industry filed a brief in support of the Obama administration. Also on the brief were several groups representing the agriculture industry.

“It’s a chance for regularizing or legalizing those people who have been here for a long, long time—working,” said Mike Gempler, executive director of the Washington Growers League. He said about 70 percent of seasonal farm workers are undocumented, and agricultural businesses have tired of waiting for Congress to act on immigration reform.

“We really do want a stable and legal workforce and we’re trying to get there,” he said, “and I see this as part of the transition.”

The National Federation of Independent Business joined a brief opposing the administration. The Federation’s Karen Harned said their concern is with the process side of things.

“Although this case is known in the media and by most people as an immigration case,” she said, “one of the issues that the Supreme Court is looking at is… whether or not the Department of Homeland Security, in this case, should have undergone notice and comment rule-making before changing the way they’re enforcing immigration laws.”

So the arguments of this case will be a mix of debate over immigration and executive authority… all happening before a divided court during an election year.