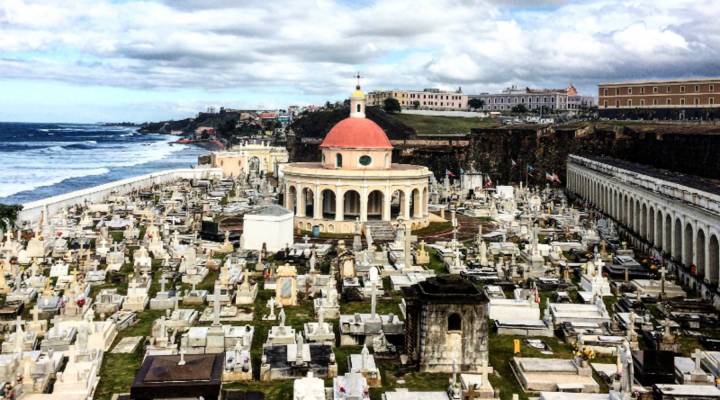 Editor’s Note: Andy Uhler went to Puerto Rico to find out how the territory’s $72 billion debt crisis is affecting its residents. This is the fifth part in our series.

Most Sundays in the town of Carolina, the Andujar family gets together to have lunch and check in. They invited Marketplace reporter Andy Uhler into their home and he says it was clear many of the more than 20 people there were worried about the Puerto Rican financial crisis – specifically about their retirement.

Joanne Morales works for the Puerto Rican government as a social worker. She helps addicts and homeless people. She’s seen government cutbacks firsthand. Some of her friends were laid off. And she knows some people who continue to work, but aren’t getting paid.

“I know some people who work in professional services and sometimes their checks are overdue for the work that person did. The get paid two or three months after the month that they were working,” Morales said.

But it’s not like you can suspend paying your bills for two or three months at a time. You work to get paid and if you’re not getting your checks on time, something’s gotta give.

“Everyone has to wait for the government; it puts a strain on the other processes,” she said.

Retirees aren’t getting paid, either. Since 2014, the Puerto Rican central government has failed to pay more than $300 million in annual pension payments.

Olga Ramirez Andujar worked for the juvenile court system in the city of Guayama for more than 30 years. At night, she was a seamstress. She retired about 10 years ago. She’s been lucky so far. She’s still getting her monthly pension checks. But she still does a bit of work in the courts to earn extra case —in case the government tells her it can’t make her pension payments.

“I have my pension. And along with my pension, I work. I have to pay for the things that I need. I still work and I work to maintain the quality of life that I have,” Andujar said.

The pension system in Puerto Rico is yet another example of the island’s problems – it borrowed money to pay for things and doesn’t have the capital to make payments. With pensions, it promised to pay citizens…and now it can’t do it.

And the retirement problem isn’t going away. An aging population and dwindling tax base don’t bode well for an island already $72 billion in debt.