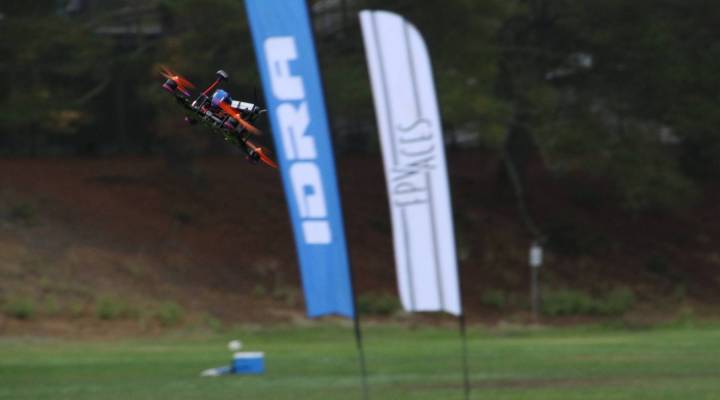 COPY
A drone racing at an IDRA competition. Courtesy of IDRA

A drone racing at an IDRA competition. Courtesy of IDRA
Listen Now

ESPN  said this week it had signed an international media distribution deal with the IDRA, the International Drone Racing Association, to broadcast drone racing. Beginning in August, ESPN 3 will live-stream events, including the World Drone Racing championships. It will also create an hour-long show from the event to be shown on the network.

But over the longer term, he said, “the question is, just because you’re racing, doesn’t mean necessarily anyone is going to watch.”

When it comes to drone racing  there’s a tiny hitch. The FAA won’t allow drones to be raced over large crowds. And the roar of the crowd, or the rev of an engine can be a big part of energizing viewers.  Even Scot Refsland, chairman of  the International Drone Racing Association, admits watching drones race can be “like watching gnats in the middle of a football field.”

Marketing drone racing could be an uphill battle, if not handled properly, said Michael Leeds, a sports economist at Temple University,

“The natural inclination, the natural step is to say well this is kind of like NASCAR and you’re going to appeal to the same kind of demographic. But it’s not,” he said. NASCAR fans follow personalities, said Leeds, not robots. But the International Drone Racing Association says that’s the present–not the future. It says ESPN will bring higher quality production to events, and viewers will  get to know all the pilots–like the 15-year-old who won $250,000 last year at the World Drone Prix in Dubai.

The IDRA is also working on using netting and plexiglass to let viewers get closer to races so they still get a thrill.

ESPN has found success presenting a diverse portfolio of sports to a wide range of viewers said Patrick Rishe, director of the Sports Business program at Washington University in St. Louis.

“From ESPN’s standpoint, they feel that it’s a niche that no one else has looked at and tried to televise on the scale that they are able to. So why not give it a shot?”

After all, he said, even Crossfit has become a spectator sport.  And relative to other sports, drone racing can be produced relatively cheaply. What other athletes wear their own cameras?

Temple’s Michael Leeds notes that viewers will even tune in to watch poker.

“People will watch anything,” he said, “So I guess there may be a market for this.”