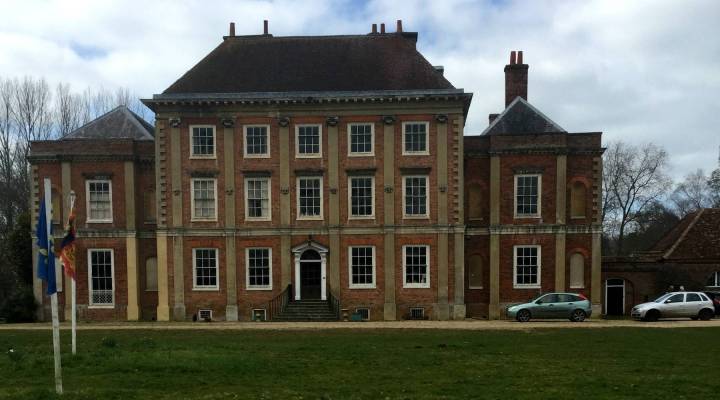 COPY
A view of the Milton Manor. Stephen Beard/Marketplace

A view of the Milton Manor. Stephen Beard/Marketplace
Listen Now

Anthony Mockler-Barret and his partner Gwenda Marsh live in Milton Manor – a beautiful, 17th century house standing in parkland a few miles south of Oxford, England. When his mother died 26 years ago Mockler-Barret inherited the manor in all its shabby, rambling grandeur. How grand? He isn’t entirely sure.

“I’ve no idea how big it is in square feet,” he said during a recent tour of the house. “And, I don’t know how many rooms we have, either.”

“Ten,” suggested Marsh, but that turned out to be just the number of large double bedrooms.

While the couple concede it’s a pleasure and an honor to live in this fine, historic country pile, they admit it has its drawbacks.

“It can get very cold in the winter,” said Marsh, shivering in early spring air.

“Unfortunately, it’s too expensive to keep the central heating on,” Mockler-Barret added. “So when it’s really cold, we wrap up warm with overcoats and scarves.”

Nimbly climbing the stairs and barreling down the long, paneled and picture-lined corridors, Mockler-Barret — with his pink cheeks and flowing, snowy white hair –  looks the picture of health and good humor. But age, damp and cold are taking their toll on Milton Manor .

Taking me into his father’s dressing room, he showed me where part of the plaster ceiling had suddenly collapsed.

All the windows are in poor condition and need replacing, and the roof needs work. But the family fortune has dwindled over the centuries and Mockler-Barret can’t even afford a butler, a basic necessity of the landed gentleman, let alone pay for all the many repairs.

“What a shame,” he said. “When I was growing  up we had a butler, there was also a chauffeur to take us to school occasionally. It’s amazing to look back on it now. But no, those days have gone. Things have changed for the worse, as my father used to say.”

This is a familiar story for Marcus Binney, head of Save Britain’s Heritage, a charity which has helped rescue scores  of country houses, and other buildings of architectural or cultural significance, from dereliction. Cash-strapped house owners are increasingly leasing out their property as a venue for commercial events, like exhibitions, sales conventions and corporate retreats.

Corridor in the Milton Manor.

Mockler-Barret has heard it all before and tried many moneymaking schemes,  including staging historical re-enactments on the grounds. They simply don’t generate enough cash, he said. And there is a problem with opening up to paying guests: the house is packed with valuable heirlooms and insuring them all against light-fingered visitors would cost a fortune.

One – albeit remote – remedy  remains. The owners of a nearby stately home were able to rescue their crumbling pile when a television scriptwriter wrote a soap opera about an aristocratic family, and set it in their house. The show, “Downton Abbey,” became a global hit.

“Downton Abbey is just down the road from us,” Mockler-Barret said. “And we’re so jealous of Lord and Lady Carnarvon. Although they won’t tell us how much they’ve made from ‘Downton Abbey,’ I think they’ve done quite well out of it.”

But that’s the fairytale. The residents of Milton Manor will be happy if they can just patch up their inheritance and avoid the humiliation and disgrace of losing the ancestral seat after 250 years of family ownership.