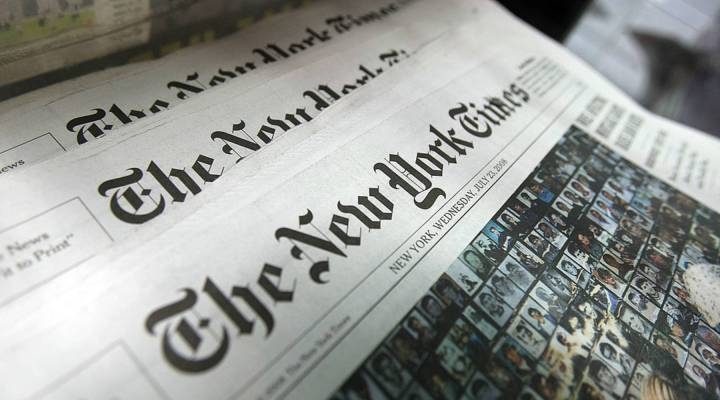 COPY
The New York Times is one of the publications that has sent a sent a cease-and-desist letter to Brave.  Mario Tama/Getty Images

The New York Times is one of the publications that has sent a sent a cease-and-desist letter to Brave.  Mario Tama/Getty Images
Listen Now

U.S. newspapers are up in arms about Brave Software, which is launching a new ad blocking browser that will replace many of the ads that appear on a publisher’s site with ads picked by Brave itself.

A group of the biggest newspaper publishers, including the Washington Post and the New York Times, sent a cease and desist letter to Brave, calling its operations “illegal.”

Publishers are facing a growing problem with ad-blocking, since their business models are still heavily reliant on ad revenue.

When you visit a publisher’s web site, like the New York Times, the web browser identifies you and sends that information back to an auction marketplace, according to Aram Sinnreich, American University media expert.

“Different advertisers bid on the right to serve you an ad in the hole that the New York Times has left on their page. Someone wins that auction in a couple of microseconds,” he said.

Consumers don’t like getting tracked as part of this process and resent having ads presented that cause a web page to load at a glacial pace.

That’s part of the problem Brave aims to solve.

“Brave Software is building a better browser that is much faster and safer and more private than any other browser by blocking all the third party ads and trackers that are slowing down the internet,” said chief executive Brendan Eich.

Brave will still present ads, and they will still be targeted at you in some fashion. But Eich says the ad placement mechanism allows for more privacy.

“We have a very private, precise data model that stays on your device in your Brave browser. We don’t even look at it ourselves in our servers, but we do have a detailed study of it that goes on all the time. And you can clear it if you want, but it’s very valuable,” Eich said.

Brave will give a 55 percent cut of ad revenue to a publisher and a bitcoin micropayment to the user. But publishers said Brave is just replacing their ads with ones that “Brave sells for its own profit.”

“This is not altruistic,” said Aram Sinnreich. “This is a smart technology that plays on consumer fears of corporate surveillance in order to inject itself as a kind of middleman between advertisers, publishers and consumers.”

Journalism professor Dan Kennedy at Northeastern University said publishers are partly responsible for the situation, having gummed up their sites with clunky ads that people now want to block.

“I think the rise of ad blocking in general and what Brave is doing in particular is only going to hasten the move to native advertising, sponsored content,” he said.

Those ads, which blend in with editorial content and can sometimes be hard to distinguish from actual journalism, are harder to block.