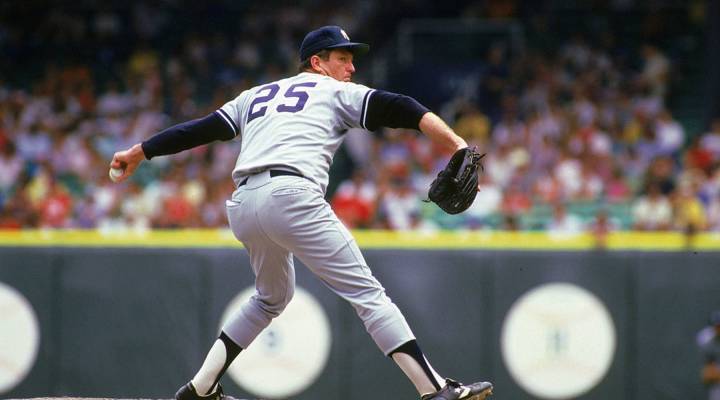 COPY
Tommy John #25 of the New York Yankees pitches during a 1987 season game against the White Sox at Comiskey Park in Chicago Illinois.   Jonathan Daniel/Getty Images

A new season of Major League Baseball began this week: fresh green grass, tons of new players, and a promising crop of pitchers.

But, MLB pitchers are going down in droves and no one is quite sure how to stop the curse of Tommy John. That’s the surgery that pitchers often have to have to repair elbow injuries.

Although pitchers are no longer throwing as much per game as they were decades ago, they are starting younger and joining high level competitive leagues like Travel Baseball, that require year round participation. Thus, more injuries.

“[It’s] like a tire that loses its tread over time and eventually just breaks,” says Jeff Passan, baseball columnist at Yahoo Sports and author of “The Arm: Inside the Billion Dollar Mystery of the Most Valuable Commodity in Sports”. “That’s usually the way the injury works with pitchers.”

Tommy John surgery is an operation in which an injured ligament in the elbow is replaced with a tendon from another place in the body, like the forearm, hamstring, or foot of the patient. This procedure was developed by Dr. Frank Jobe in 1974, after a pitcher for the Los Angeles Dodgers named Tommy John blew out his elbow. Although the surgery saved Tommy John’s baseball career, as it has for many other ball players, it’s not 100 percent fool-proof and sometimes the players don’t make it back on the mound.

Regardless, Passan said, the surgery has become so common, it’s kind of a routine procedure for pitchers. So much that it’s starting to affect kids, and the future of baseball.

To hear the full story, click on the player above.