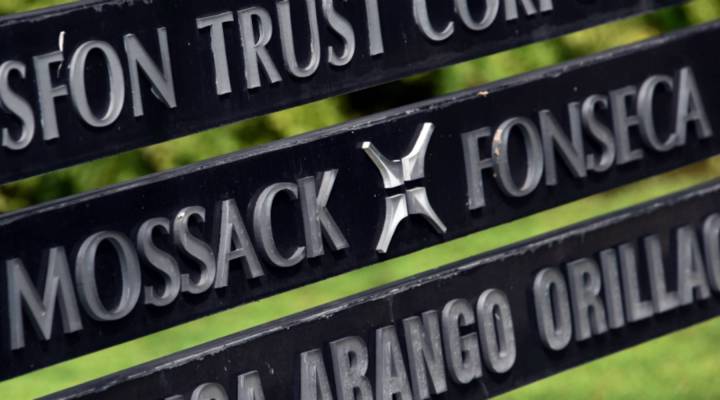 COPY
A view of a sign outside the building where the Mossack Fonseca law firm offices are based. RODRIGO ARANGUA/AFP/Getty Images

A view of a sign outside the building where the Mossack Fonseca law firm offices are based. RODRIGO ARANGUA/AFP/Getty Images
Listen Now

In the wake of the release of a large cache of leaked documents from the Mossack Fonseca law firm in Panama, legislators, regulators and watchdogs around the world are promising a crackdown. Mossack Fonseca operates in dozens of countries, providing legal services to wealthy people that enables them to establish offshore shell corporations and secret bank accounts.

Regulators in the U.S., France, the U.K., the Netherlands, and even Panama itself — a notorious tax haven — are among those who announced Monday that they will examine the documents. They will try to determine whether the data release — coordinated by the International Consortium of Investigative Journalists — provides leads for further investigation, or grounds for prosecution, of individuals and companies involved in tax evasion, money laundering, criminal enterprises and government corruption.

The hacked documents point to untold billions having been squirreled away for decades by government figures, business elites and celebrities in tax havens including the Bahamas, the British Virgin Islands, Singapore, Hong Kong, Panama, Malta, Jersey and the Isle of Man. That might suggest that there is little that has been done — or can be done in the future— to stem international tax evasion.

On the contrary, “there’s been substantial progress since the financial crisis. Now there is a law, the Foreign Accounts Tax Compliance Act, that forces foreign financial institutions to automatically tell the IRS about their clients who are U.S. citizens, and about their income and wealth,” said economist Gabriel Zucman at the University of California, Berkeley. Zucman is author of the book “The Hidden Wealth of Nations: The Scourge of Tax Havens.”

Zucman said there are still significant limits and loopholes to the IRS’s ability to identify possible tax evaders hiding their income in overseas tax havens. And that in turn hampers the U.S.’s ability to obtain payment and/or punish those trying to avoid U.S. taxation. Zucman said the IRS still depends on authorities in those foreign tax havens—as well as the tax havens’ bankers, lawyers, accountants and other financial professionals — to comply with new U.S. disclosure laws. And he said those institutions and individuals still face huge financial incentives to help clients transfer and obscure their wealth overseas.

Zucman also pointed out that, while U.S. tax authorities now receive vast troves of data on domestic and overseas banking transactions, the IRS — which has been starved for funds by conservative critics in Congress — may lack the personnel and technical expertise to analyze the data and pursue violators.

Rand Corporation political scientist Colin Clarke, author of the book “Terrorism, Inc.: The Financing of Terrorism, Insurgency and Irregular Warfare,” said that in the post-9/11 era, Congress has given U.S. financial regulators robust new tools to monitor cash flows through banks operating in the U.S., including foreign-owned banks.

“We know this is a constant game of cat and mouse—combating money laundering and attacking networks that fund terrorism and insurgency around the world,” said Clarke. “Many terrorist and insurgent groups take advantage of these overseas tax havens, and we’ve seen the Middle East as a kind of locus of this — countries like Kuwait, Qatar, Saudi Arabia.”

Clarke said the U.S. has had some success enlisting those Middle East allies, as well as allies in Europe, Asia and South America, to help stem the flow of funding to terrorist groups through secret bank accounts and shell companies in tax-haven countries, where the money quickly becomes untraceable.

“There have been successes, including against Al Qaeda,” said Clarke. “We have not only nation-states, but global entities—the World Bank, International Monetary Ffund, UN, the inter-governmental Financial Action Task Force (FATF) — taking notice.”

Clarke said there’s a growing recognition among counter-terrorism strategists around the world that it’s as important to attack the “bad guys” on the financial front as on the battlefield.

“There’s the kinetic fight—the bombs, guns, missiles, etc.,” said Clarke. “But there’s also what’s been viewed as the ‘softer’ financial side of counter-terrorism, although I don’t think it should be viewed that way. It’s a very effective way of choking off these groups.”