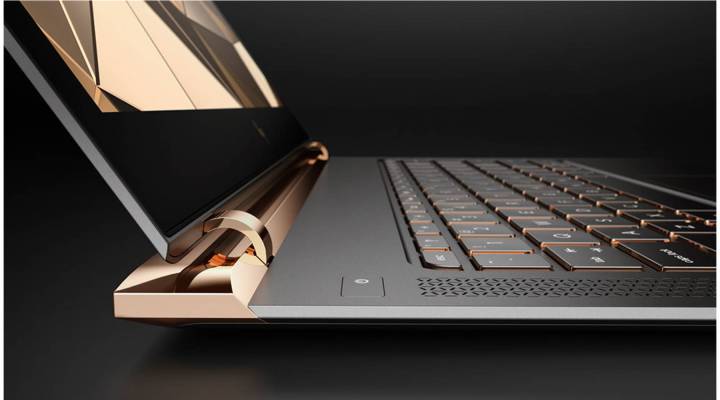 The Spectre 13 from HP revealed today and it's giving Apple a run for its money.  HP

The Spectre 13 from HP revealed today and it's giving Apple a run for its money.  HP

Earlier today at the International Luxury Conference, HP unveiled a new lean laptop called HP Spectre. The sleek black and gold computer is going for the “not your dad’s laptop” vibe, comparable in style to the matte gold MacBook Retina released by Apple in 2015. A 12-inch MacBook Retina is 13.1 mm thin, which is slimmer than the MacBook Air. HP’s new Spectre comes in at 10.4 mm for a 13-inch screen. Both HP and Apple’s premium laptops come at a similar price range, the Spectre will start at $1169 while Apple’s MacBook Retina comes in a little pricier, starting at $1299.

In an interview with The Wall Street Journal, HP’s president of personal systems, Ron Coughlin said, “for years, Apple has been seen as the innovator and the driver of innovation, HP is really taking over that mantle.”

However, as most laptop users know, HP hasn’t always looked this cool. Apple has long been considered a style pioneer when it comes to laptop design, but it seems HP is trying to catch up to the thin and minimalist standard set by Mac laptops.

Both companies, no doubt, had clunky and ugly beginnings. We took a look back and compared laptops from HP and Apple as they went from ugly ducklings to the compact design we know today:

Apple’s first laptop to feature a color display, the Powerbook 165 versus HP’s super-portable Omnibook 300 that weighed just 2.9 pounds, the lightest laptop on the market at the time.

By 2003, both companies went through a slew of models, including the short-lived clam-shelled colorful iBook G3 from Apple. The final form of the iBook family — depicted above — stayed on the market for 3 years from 2003 to 2006. HP had various models of their Pavillion notebook, this model, the Pavillion ze4200 weighed a hefty 6.5 pounds, while Apple began shaving weight and moving toward the current MacBookPro design.

Apple released the first generation of MacBook Pro in 2006, which stayed on as its only laptop model for two years before the company added the MacBook Air to the line. HP’s newest laptop at the time, the HP Pavilion dv6000, hadn’t changed much in design from the previous Pavilion models.

Apple released the first generation of MacBook Airs in 2008, setting the trend for leaner notebooks at 0.76 inches thin, which is thick by today’s standards. In 2009, HP released a new model, the Envy. The first of those models being the Voodoo Envy depicted above.

By 2015, Apple released new versions of the MacBook Air, but the thinnest laptop Apple has on the Market is the MacBook Retina. The Retina hit stores on April 11, 2015 and is offered in three different colors including  space gray, silver and gold. Today, HP aimed to one-up Apple with it’s lean matte black and gold Spectre from the Envy family.