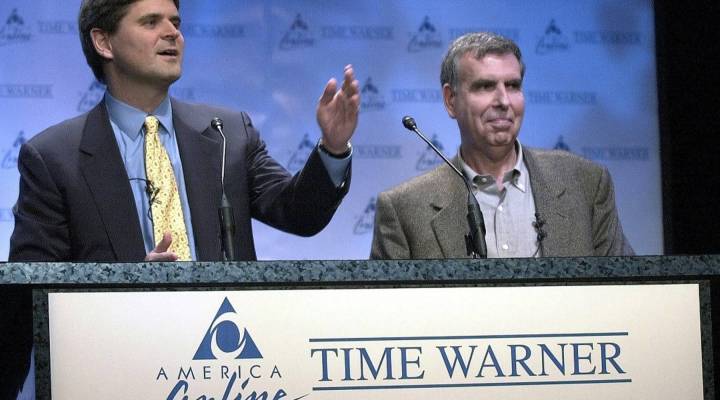 If you’re an internet user of a certain age, the words “you’ve got mail” will likely trigger some very real memories.

You might remember the digital screech of a dial-up modem,  a pile of discs promising a thousand free hours of internet access, or the sound of your buddy entering AOL Instant Messenger.

Those memories come courtesy of America Online, the internet company of the Web 1.0 era. Steve Case co-founded AOL in 1985, and he’s the former CEO and chairman of the board. His tenure included the disastrous merger with Time Warner. Case says that when it comes to mergers, it’s not just the idea that counts.

Says Case:”We didn’t have the right people focused on the right priorities working together collaboratively in the right kind of way. And what could have been a great transformative company ended up struggling.”

He’s since become a venture capitalist, a philanthropist, and now an author.  His book is called, with all deference paid to Alvin Toffler, “The Third Wave: An Entrepreneur’s Vision of the Future.”

Case first read Toffler’s  “The Third Wave” as a senior at Williams College, and says all he could think about was “breaking into the fledgling digital industry.” But he could never get past the first interview.

So Case took a job at Proctor & Gamble, then worked for a company that seemed even further from the burgeoning world of computers and code – Pizza Hut. But there was more to the Kansas-based pizza makers than met the eye, as Case explains in his book, “The Third Wave: An Entrepreneur’s Vision of the Future“ Check out an excerpt below.

After a couple years of working at P&G in Cincinnati, I moved to Kansas to join Pizza Hut as Director of New Pizza Development. To this day, I’ve never had a better title.

My motivation was twofold: First, I was offered a healthy increase in salary and responsibility, and second, I thought it would be helpful to understand how a more entrepreneurial company worked. Pizza Hut was founded in 1958 by two brothers, Dan and Frank Carney, while they were still students at Wichita State University. It had grown from a single location at the corner of Kellogg and Bluff to become the nation’s largest pizza chain, which it accomplished largely by enabling franchisees to innovate. This bottom-up approach to innovation differed from P&G’s top-down style, and I wanted to understand it.

Originally, the job involved my working in the test kitchens in Wichita. But I advocated that we hit the road to find out what was happening throughout the country. My view wasthat, though innovation was possible within our walls, most of the innovation was happening beyond them. I created and led an advance team, and we started roaming the U.S., looking for a great idea to incorporate into the new menu. The company would send me to places like Washington, DC, put me up in the Four Seasons in Georgetown, and then task me with eating the city’s best pizza. There are worse ways to live. I did learn rather quickly how difficult it was to take something out of a test kitchen and then execute it across five thousand restaurants where the chefs were teenagers with limited skills. A lot of our ideas that made sense in theory flopped in practice.

At the time, one of the concepts we were testing was home delivery. This was 1982, and though pizza was popular, delivery wasn’t yet universal. We were also working on ways to take pizza more convenient and more portable. We spent a lot of time trying to figure out if calzones or pocket pizzas could work as a carry-out option for people on the run. It’s funny to think, looking back on that year, that the things we were focused on-convenience and portability-would become such crucial parts of the company I would later help build. So would our desire to keep things simple and focus on the basics.

I only lasted at Pizza Hut for a year. My obsession with Toffler hadn’t subsided; it had intensified. I wanted to be part of his vision. I needed to find a way in.”