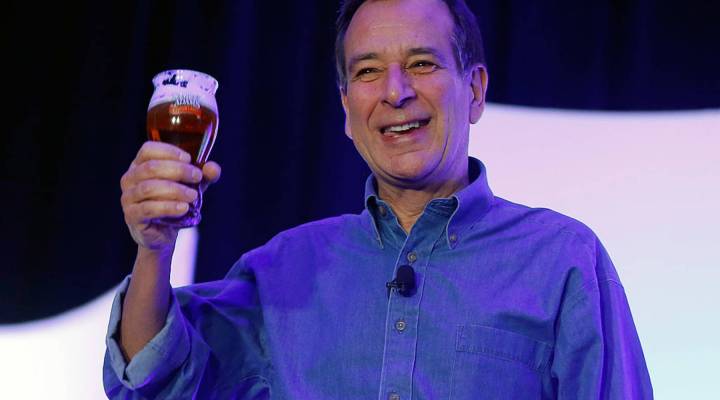 The Boston Beer Company, brewers of Sam Adams Lager, is the biggest producer in the craft beer market. The company shipped over 4 million barrels of suds last year and that brought in a crisp $1 billion in revenue. All that and Boston Beer accounts for just a mere 1.5 percent percent of all beer production in the U.S.

And that’s got some people wondering where Sam Adams fits in craft beef definition. The company’s founder and CEO, Jim Koch, will tell you he’s still firmly in that category and wants to continue growing the craft beer market from where it currently stands at 10 percnet to… well, who knows.

Boston Beer helped pave the way for craft beer’s meteoric rise in the past few decades and Koch writes about that experience in his new book, “Quench Your Own Thirst: Business Lessons Learned Over a Beer or Two.” Check out an excerpt below.

From the way my father was looking at me, you’d think I had just proposed robbing a bank. A big, ominous-looking bank with gun-toting security guards. “Why in the world would you do that?” he asked.

He waved his finger at me. “You’ll never succeed. The big guys will eat you alive. They’ll grind you up like they did me.” He shook his head. “It’s taken our family a hundred and fifty years to get the smell of the brewery out of our clothes.”

We were sitting in my parents’ kitchen in Cincinnati. Picture a 1950s linoleum floor, Formica counters, and wallpaper depicting culinary dishes in alphabetical order, apple strudel to zucchini bread. It was the spring of 1984, and I had just announced that at the age of thirty-four, I was quitting my job as a management consultant to start a beer company. I figured my dad would be happy. After all, he had been a brewmaster. His father had also been a brewmaster. So had his father. And his father. Five generations of first sons in the Koch family had brewed beer, making us the longest line of brewmasters in the United States. And now, with me, the lineage would continue. What could be better?

I pointed to the business plan I had spread out on the kitchen table. “Dad, nobody’s doing this the right way. I think I’ve got a way to make a go of it.” I sketched out my idea to start a small-scale beer company in Boston making high-quality beer for a limited number of drinkers in the region. “I’m not going to compete with the big boys like Anheuser-Busch. I know they’d kill me. But there’s another way. I’m going to look for drinkers who appreciate good beer and who would pay a premium for richer, more flavorful beer. I’m sure those drinkers exist. If I just focus on making a better beer, I know somebody will drink it.”

Dad tapped the table impatiently, although I thought he seemed at least faintly interested now. “Are there enough of these drinkers? Can you make a living?”

“Not the living I currently make, but I can make a living.” I pointed at some numbers I’d calculated. “I think after five years I’ll make five thousand barrels a year, with eight employees and $1.2 million in revenue. That’s enough.”

“No, but it’s enough. And I’ll be happy. I’ll be running my own small brewery.”

My father thought about this for a moment. “It’s not realistic. Brewing today is about size—nothing else. You’re crazy!”

“Dad, there are a few microbreweries that have started up.” In fact, there were about a dozen, mostly on the West Coast. Quality was unpredictable. Cracking open a bottle, you didn’t know whether you would get a really great beer or a science project.

“How many are making any money?” Dad asked.

He laughed. “Sounds like a good business. You make beer but no money. How long can you afford to do that?”

He was right: There was scant reason to think my venture would be any different. But I was determined to leave my job and start my own business, and brewing was the idea I had come up with that excited me. I wanted to persuade him (and myself) that I wasn’t crazy.

We sat there, neither of us speaking. Without warning, he rose to his feet. “Jim, follow me.”

“Where are we going?”

He led me up to the attic. He flicked on a light and began walking toward the back.

“I want to show you something.”

I followed him, taking care not to bump my head. We made our way around boxes and old furniture until we came to a dusty trunk on which he had stacked years of Road & Track and Motor Trend magazines. (Other than his family, Charles J. Koch loved two things: cars and beer.) “Here, help me with this.” We moved the magazines and cracked open the trunk. Inside were notebooks, folders, and loose papers—some scrawled with handwriting, all yellowed with age. He rifled through papers and held a few up for me to see. “This is what is left of the Koch family beer archives—my course material, my brewing notes.” He pulled out a thin folder. “And here are the family recipes.” Resting the folder on the edge of the trunk, he opened it and read for a few minutes in silence. Then he let out a little hoot as he shook a piece of paper he’d found. “This is the best beer recipe our family has! It’s old—from the 1860s. If you’re going to do this crazy thing, you might as well start with the best recipe.”

He handed me the paper so I could take a look. Moving to where the light was better, I saw that the recipe was for an “all-malt” beer, one that adhered to the Reinheitsgebot (a German beer purity law dating to 1516). The Reinheitsgebot was the world’s first consumer protection law, stipulating that beer could contain only four ingredients: water, yeast, malted barley or wheat, and hops. Virtually all twentieth-century American beers and some European beers used corn, rice, and preservatives in addition to malt because those ingredients were cheaper and made the beer lighter and “more drinkable.” The recipe my father gave me took none of these shortcuts. It made a substantial beer, pure and simple. And it used traditional, nearly forgotten brewing techniques with arcane names like kräusening, decoction mashing, and dry hopping.

I glanced through the recipe and then looked at my father. “You won’t be sorry you gave this to me.”

I promised him I would.

THE COMPANY I FOUNDED in 1984, the Boston Beer Company (BBC), gave me both pleasure and purpose beyond my wildest dreams. By 1988, my founding partner, Rhonda Kallman, and I were selling 36,000 barrels a year, seven times what we’d anticipated. Rhonda had been my assistant at Boston Consulting Group (BCG), the management consulting firm where I’d been working, and her skills complemented mine perfectly. Together, we sustained the company’s exponential growth for years. We won awards at beer competitions, entered dozens of new markets, added dozens of employees, and began to offend the companies making big imported beers like Heineken, Corona, and Beck’s. Other start-ups rushed to replicate our success, and the craft beer segment was born.

In 1995, when Boston Beer went public and began selling shares of its stock on the New York Stock Exchange, it seemed we could do no wrong. And then, just months later, the empire struck back (to use a Star Wars metaphor) in the form of an industry Goliath hell-bent on the destruction of Sam Adams in particular and craft beer in general. Everything we had worked for was at risk. We persevered, though, and some twenty years later the craft revolution is stronger than ever, accounting for more than 10 percent of the overall beer market. Driven by further innovations like Angry Orchard hard cider, Boston Beer’s 2015 revenues have reached nearly $1 billion. That might be an impressive-sounding number, but Samuel Adams is still only about 1 percent of the overall U.S. beer market. That’s right; it took us thirty years to get to 1 percent. We started at invisible, grew to infinitesimal, got to minuscule, and moved to tiny. In 2015 we can proudly say, “We finally made it to small!”

Never in a million years did I think Boston Beer would grow to employ more than a thousand people. Never did I think I’d get to drink some 24,000 beers as part of my job. Never did I think my work days would be so diverse and engaging, and that they would include tasting experimental brews, presiding over weddings at our brewery (I’ve been a bridesmaid on three occasions—always a bridesmaid, never a bride), getting dunked into a tank of expired beer, designing brewing equipment, making yearly trips to Germany to select hops, and having a gun pulled on me by a startled bar owner.

As I’ve described these experiences in bars across the world, people have asked me what I’ve learned—what words of wisdom do I have? This book is my answer. I serve up stories I hope will help you if you’re starting a new business, working in an established one, or trying to figure out what you want to do next. I address specific business topics like sales, hiring, innovation, culture, and leadership, but I also advocate for a broader approach of openness and experimentation in business and life. And of course, I include discussion of my most colossal screw-ups.

In the spirit of a tavern conversation, I invite you to settle into your favorite chair, crack open a cold Sam, and imagine we are sitting together. Cheers!

Excerpted from QUENCH YOUR OWN THIRST: Business Lessons Learned Over a Beer or Two. Copyright © 2016 by Jim Koch. Excerpted by permission of Flatiron Books, a division of Macmillan Publishers. No part of this excerpt may be reproduced or reprinted without permission in writing from the publisher.