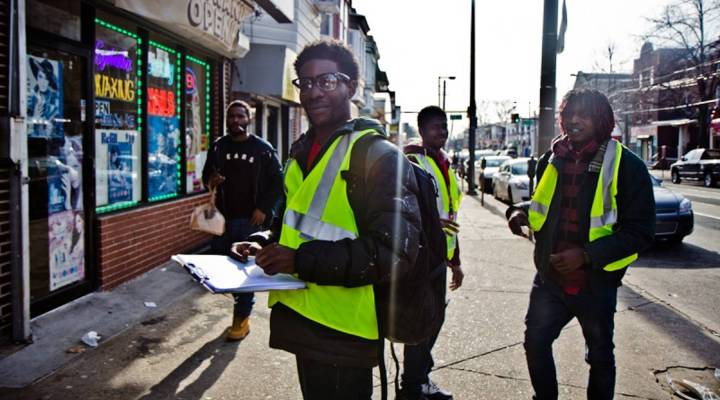 Even before Tax Day,  Philadelphia resident Roslyn Sanders is ahead of the game. She’s at her local community development corporation getting her taxes done and it’s the second time she’s come here.

Sanders is back because last year, the organization helped her and her husband, Donald get a big refund by figuring out they qualified for the Earned Income Tax Credit, or EITC. She said they got a check in the mail for more than $3,000.

“I felt so good, I came back and brought these guys pizza, I did, just the whole staff ‘cause I really appreciate what they had done,” she said. In addition to four boxes of pizza, Sanders said she used the money to pay her car loan and other bills that had gotten behind.

Sanders used to file her own taxes and when she saw the EITC on the forms, she ignored it. “I thought it was just for certain people, like if they have children,” she said. “I never thought we were eligible for it.”

There are a lot of people like Sanders in Philadelphia.

The EITC is considered one of the country’s most effective anti-poverty programs.  It’s designed to help boost families over the poverty line by offsetting how much low-income workers pay in federal income taxes.

In Philadelphia, about 200,000 low-income residents are eligible for the EITC, but the city estimates 20 percent of them didn’t claim the tax credit last year. Revenue Commissioner Frank Breslin said those people left a combined $100 million on the table.

“The numbers kind of just jumped out at us and we thought, this is something that we should really engage in,” he said.

Breslin said the city held focus groups to find out why so many people weren’t getting the tax credit. A lot of people just didn’t know it existed or they couldn’t afford good tax preparation services and didn’t know where to get help. So this year, Philadelphia is spending more than $1 million on an awareness campaign.

There’s a website with information translated into five different languages, posters on buses and subways and there are ads on Pandora. The city is also paying a street team to go into neighborhoods where a lot of residents could be eligible and giving out information to local business owners. However, most of the money for the campaign – about $700,000 – is being spent on two nonprofits to provide free tax preparation services across the city.

Michelle Arthur runs one of the free tax sites in North Philadelphia and said so far, the campaign seems to be working.

“Everyone’s asking,” she said. “All the clients are now asking, ‘Do I qualify?’ ‘Cause they’re aware that this is another credit, even though they didn’t know that they may have been receiving it the whole time.”

Recently, Arthur told a woman she’d be getting more than $1,000 through the program “And she just did a little happy dance in her chair,” Arthur said.

Breslin said the city is tracking the success of the campaign by collecting data from the free tax sites.  He  hopes the city can find a way to keep the campaign going next year.

“We really felt a responsibility to let the citizens know that this is available for them so that it can help them in whatever way – pay bills, buy a car,” he said.