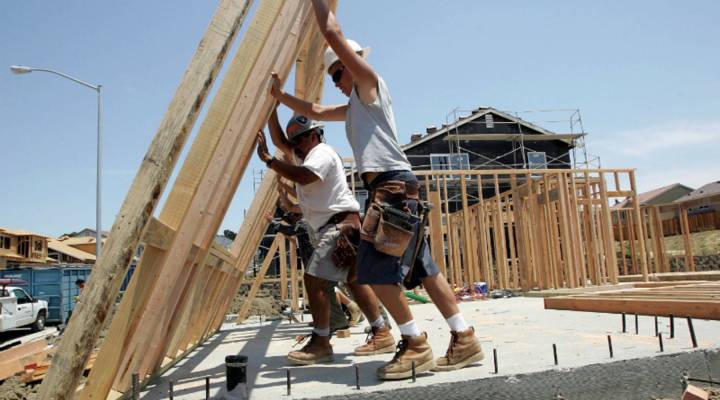 COPY
Being ill or disabled is the most common reason among prime-age men for being out of work. Justin Sullivan/Getty Images

Being ill or disabled is the most common reason among prime-age men for being out of work. Justin Sullivan/Getty Images
Listen Now

Approximately 1.4 million men in their prime working years—age 25-54—have left the workforce since before the Great Recession began, bringing the total number to approximately 7 million.

Jonah Sutton-Morse, 33, is one of them. He has care of his two daughters, age two and five, while his wife works full time in a big law firm in Chicago. Sutton-Morse is a former business consultant. He’s been a stay-at-home dad for more than four years.

Soon after his first daughter was born, he and his wife returned to work, and they hired a nanny. “One Tuesday, I flew down to Florida to calm an angry client,” he said. “On Thursday my wife said ‘I don’t think having a nanny is going to work out.’ And on Friday I told my boss ‘I’m not coming in next week.’ About two weeks later I called him and said ‘Yeah, I’m not coming in at all, I’m going to do the stay-at-home dad thing for a while.’ I would love to do it forever and ever and ever.”

With his wife’s well-paid law-firm job, they can afford this one-income life—for a while, anyway.

“It’s both hard to find a job that would pay for childcare and for what I am doing for our family right now,” said Sutton-Morse. “And also the longer I don’t do that, the harder it becomes to go back to what I was doing, or find something new to do.”

According to the Labor Department, disability or illness accounts for the biggest group of prime-age men not working now—many of them receiving government disability benefits.

Economist Peter Morici at the University of Maryland argues that some of these men—along with others who have simply become discouraged and stopped searching for jobs—could find work.

“Indolence has become a problem with American men,” Morici said. “When I talk about this on the radio, I’ll get email from someone who will say ‘I was a vice president of a PR company, do you really expect me to take a job at a Starbucks?’ My answer to that is yes.”

“From my volunteer work for United Way Worldwide, I just don’t hear that,” he said. “I’m sure you can find me one person who is being lazy and fits that conservative model. But for the most part people want to work, people want to be productive, people want to contribute.”

Rodgers argues that what is holding many of these prime-age men back from trying to rejoin the labor force is low wages and inadequate hours in the jobs that are available, and deteriorating skills as they stay out of the workforce longer and longer.

“They could be on disability, they could have unemployment insurance, they could have savings,” said Rodgers. “And that raises the wage at which they’re willing to return to the labor force, willing to begin searching for a job. And they may not have the requisite skills, relative to what employers need. Many are resilient, but have fallen on hard times and become discouraged. They’ve lost their identity, or their identity has been shaken.”

Why aren’t more Americans working or looking for work?