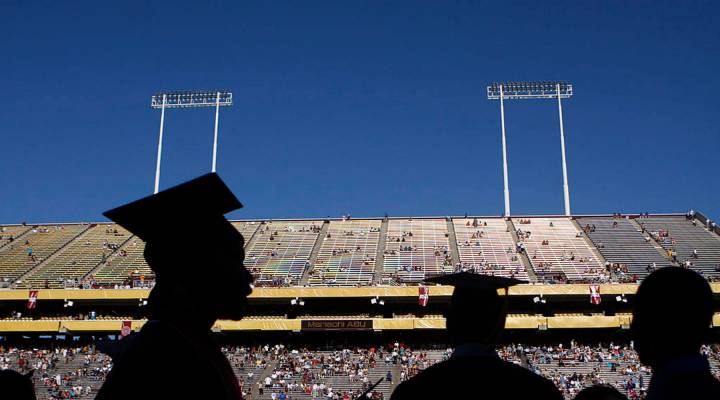 Just over a decade ago, low-income students at Georgia State University graduated at barely half the rate of other students. Today that gap is closed, thanks to initiatives like more intensive advising and grants of as little as $300 to cover unmet financial need.

“We want to lift up those examples so that they can be replicated by other institutions,” said U.S. Secretary of Education John King.

The programs are highlighted in a new report from the U.S. Department of Education. Taxpayers spend almost $30 billion a year to help send low-income students to college through the federal Pell grant program – not to mention billions more in subsidized loans. Yet only half of those students actually finish college within six years.

The report does not call out colleges by name that are doing a poor job, though it does flag the Ivy League for not admitting more low-income students. At some schools fewer than one in 10 students receive Pell grants.

“I think it’s a good sign that the federal government is beginning to pay attention to something that has been too long ignored, and that is whether or not our Pell grant students are actually graduating,” said Tom Sugar with the advocacy group Complete College America.

Pell graduation rates matter, he said, and not just because taxpayers are spending billions of dollars on the program.

“People who complete college are much more likely to have jobs and to earn more,” said Lauren Asher, president of the Institute for College Access and Success. “It’s getting harder and harder to reach or stay in the middle class without some kind of college education.”

One big reason so many low-income students don’t graduate, she said, is the rising cost of college.

Most low-income students have to work through college, and many aren’t academically prepared. Student advocates say colleges might to do a better job of supporting those students if schools were required to report their Pell graduation rates to the government. The Education Department’s report relied on data from other sources.

“If it matters, measure it,” said Sugar.

But without more resources, colleges can only make modest gains, said Sara Goldrick-Rab, a professor of educational policy studies and sociology at the University of Wisconsin-Madison. The majority of Pell recipients attend community colleges and public four-year universities, she said, which have seen substantial declines in state funding per-student.

“The price is so high, and the support is so low, that their graduation rates are largely a function of that,” she said. “Shaming those institutions isn’t going to do a darn thing.”