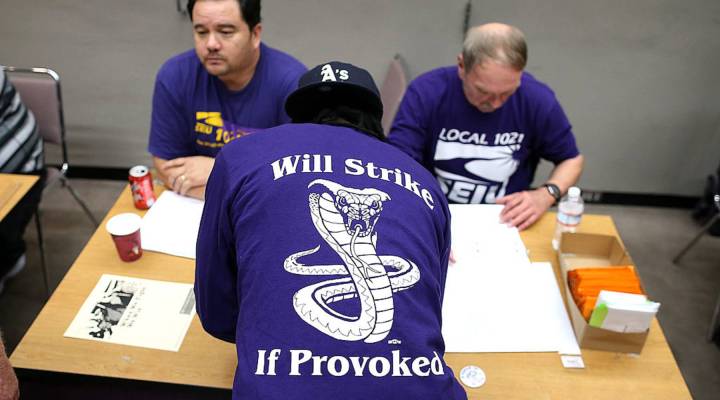 COPY
The Department of Labor is cracking down on anti-union efforts. Justin Sullivan/Getty Images

The Department of Labor is cracking down on anti-union efforts. Justin Sullivan/Getty Images
Listen Now

The Department of Labor today announced a new rule designed to pull the curtain back on anti-union organizing efforts. As it stands, companies and the outside consultants they hire must only disclose discussions when the consultants contact employees directly. The new rule, which takes effect in April, requires disclosure of any discussions to combat union activity.

These consultants are called persuaders. As soon as a company gets wind that a union is trying organize, they’re the ones management calls.

“There’s a whole industry of law firms and consultants whose job it is to fight unionization,” said Nelson Lichtenstein, director of the Center for the Study of Work, Labor, and Democracy at the University of California, Santa Barbara.

An estimated 75 percent of companies pay these consultants, often hundreds of thousands of dollars, basically to tell management what to say to discourage workers from unionizing –things like:

“The union can’t force us to do anything. Just typical stuff that union’s bad, employer’s good, we don’t need a third party,” said Maria Somma, director of organizing for the United Steelworkers. She said unions by law have had to disclose information on staff salaries and union dues. But companies have not had to disclose how much they spend fighting unions.

The decline of unions over the last few decades has contributed to stagnant incomes for the middle class. At the same time, the anti-union consulting business has prospered, according to Stephanie Luce, who teaches labor studies at the City University of New York’s Murphy Institute.

“This industry has grown from a very small industry in the 1970s to a multibillion dollar international industry,” Luce said.

Requiring transparency, she says, is one small step the Obama administration is taking to level the playing field.