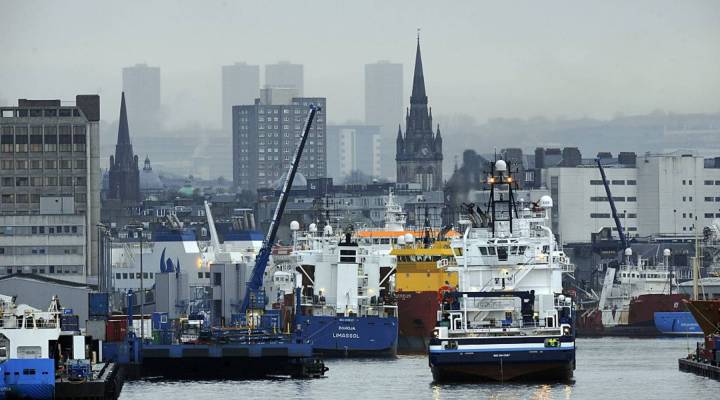 COPY
Ships are seen in Aberdeen Harbour, the busiest port for the oil industry in the UK, in Aberdeen, Scotland on January 21, 2015. Andy Buchanan/AFP/Getty Images

Ships are seen in Aberdeen Harbour, the busiest port for the oil industry in the UK, in Aberdeen, Scotland on January 21, 2015. Andy Buchanan/AFP/Getty Images
Listen Now

“I’ve seen it a lot busier.” he said “There are very few boats to be seen here. It’s a sign of the depression we’re seeing in the oil industry in Aberdeen.”

Shepherd is a petroleum geologist and – like many who have made a living from the oil and gas fields in the North Sea – he is suffering in the oil industry shakeout.

“I can’t find work. So I’m waiting for the oil price to pick up so I can get a job again.” he said.

Seventy thousand jobs have been lost in the British sector of the North Sea over the past year due to the falling price of crude. Production costs are just too high in the often stormy waters off this coast and many of the oilfields are now thought to be operating at a loss .  While many of the workers who have been laid off do not live in Aberdeen, some do and the city is feeling the effects of the downturn. Many hotels are empty, cab drivers complain that their takings are down by 30 percent and there are some signs of acute financial distress.

Dave Simmers, who runs a food bank on Poynernook Road near the harbor, said that for the first time ever he had seen once rich oil workers coming in for a free food parcel.

“One man arrived in a four wheel drive Porsche.” Simmers said.  “ The car was about to be repossessed, it was the tail end of his Porsche driving days. He had nothing and was desperate.”

Even though some of the oil rig workers earned as much as $1,500 a day at the height of the boom and  flaunted their wealth,  Dave Simmers says he feels sympathy for people who suffer a sudden and drastic loss of income and status.

“If you think about the dramatic change in circumstance and how people sustain themselves through that emotionally – it’s such a dramatic impact. Dreadful.” Simmers said.

Mark Russel knows the feeling.  He earned a very good income — $750 a day  ––  when he was employed selling communication equipment to the oil rigs. He was laid off last summer and hasn’t worked since.

“It is quite sobering and alarming at times, when the outgoings continue to outgo. But there’s been nothing coming in for nearly 8 months.”  Russel said.

He is living off his savings, desperately applying for jobs, still dazed by his and Aberdeen’s  reversal of fortune:

“I think it’s shocked a lot of people that it’s happened so quickly and dramatically. I certainly didn’t think it would be so brutal and aggressive.  That really has shocked me.” he said.

The downturn in the North Sea  has forced  many oil workers who live in the city  to look  much further afield for employment.  Dennis Krahn is a veteran oil rig director from Texas who has worked out of Aberdeen on and off  for more than 30 years and has now turned to drilling in Africa.

He plans to stay in Aberdeen – even though  he’s not operating  in the North Sea — because he’s tapping into an onshore resource:  the expertise that has grown up in the city.

“You can drive across this city in 30 minutes or so and find the answer to any question you ,may have about oil and gas.” Krahn said.  He believes that Aberdeen – like Houston – can evolve into an oil capital that doesn’t actually produce a whole lot of oil.